Start a Wiki
The Zuiyo-maru carcass (ニューネッシー, Nyū Neshii, lit. "New Nessie") was a carcass caught by the Japanese fishing trawler Zuiyō Maru (瑞洋丸) off the coast of New Zealand in 1977. The carcass's peculiar appearance led to speculation that it might be the remains of a sea serpent or prehistoric plesiosaur.

Although some insisted it was "not a fish, whale, or any other mammal", analysis later indicated it was almost certainly the carcass of a basking shark by comparing the number of sets of amino acids in the muscle tissue. Decomposing basking shark carcasses lose most of the lower head area and the dorsal and caudal fins first, making them resemble a plesiosaur. The reportedly foul-smelling, decomposing corpse reportedly weighed 1,800 kg and was about 13 m long. According to the crew, the creature had a one and a half meter long neck, four large, reddish fins and a tail about two meters long. No internal organs remained, but flesh and fat was somewhat intact.

On April 25, 1977, the Japanese trawler Zuiyō Maru, sailing east of Christchurch, New Zealand, caught a strange, unknown creature in the trawl. The crew was convinced it was an unidentified animal, but despite the potential biological significance of the curious discovery, the captain, Akira Tanaka, decided to dump the carcass into the ocean again so not to risk spoiling the caught fish. However, before that, some photos and sketches were taken of the creature, nicknamed "Nessie" by the crew, measurements were taken and some samples of skeleton, skin and fins were collected for further analysis by experts in Japan. The discovery resulted in immense commotion and a "plesiosaur craze" in Japan, and the shipping company ordered all its boats to try to relocate the dumped corpse again, but with no apparent success.

A basking shark, the identity of the carcass.

Comparisons of differences between the decomposed carcass and a fresh one. 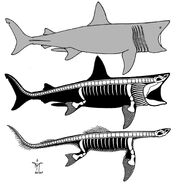 Add a photo to this gallery
Retrieved from "https://cryptidz.fandom.com/wiki/Zuiyo-Maru_Carcass?oldid=100714"
Community content is available under CC-BY-SA unless otherwise noted.