In Medieval folklore, the Ziphius, or “Water-Owl”, was a monstrous nautical creature said to attack ships in the northern seas, as seen in the gallery below. It possessed the body of a fish and the head of an owl, complete with massive eyes and a wedge-shaped beak. “Ziphius”, meaning “sword-like” in Latin, may refer to the beast’s fin, which was said to be able to cleave the hull of a ship like a blade.

Today, the inspiration for the Ziphius is known as Cuvier’s Beaked Whale, the most widespread species of beaked whale. Also known as the Goose-beaked whale, this creature is found as far north as the Shetland Islands (the most northerly region of Scotland) and as south as Tierra Del Fuego at the tip of South America. It is the only member of the genus Ziphius, which bears the name of its legendary identity. Some additionally attribute the inspiration of the Ziphius to the orca (killer whale) or the great white shark, based on certain depictions of the beast as a predator to pinnipeds.

Bondegezou - Another cryptid to be proven real. 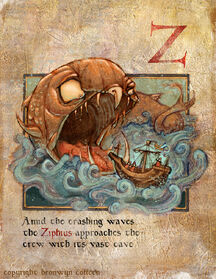 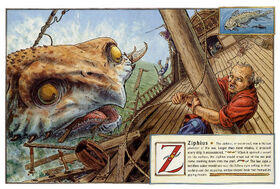 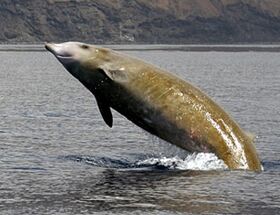 Add a photo to this gallery
Retrieved from "https://cryptidz.fandom.com/wiki/Ziphius_(Cuvier%27s_Beaked_Whale)?oldid=98887"
Community content is available under CC-BY-SA unless otherwise noted.