The Zheng (狰) is a leopard creature from Chinese Mythology. It is one of the mythical beasts featured in the Chinese classic text Classic of Mountains and Seas (山海经).

According to the Classic of Mountains and Seas, the Zheng lives on Zhang’e Mountain which has no grass and trees. The Zheng is described looking similar to a red leopard, having five tails and a single horn. It sounds like striking stones. It was said to be ferocious and brutal. 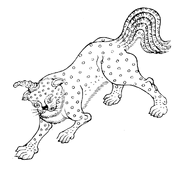