The Zaratan is a gigantic sea turtle described in folklore and literature, whose shell looks like a sloped, rocky mound several hundred feet in diameter. Sailors mistakenly see its shell as a small tropical island, and in their search for fresh water and food drop anchor and land. When night falls however, the monster sinks beneath the waves, dragging down the ship and drowning the crew.

Alternative versions of the Zaratan describe it as a giant whale or octopus, or a even a great fish that strives night and day to bring its tail to its mouth, but cannot because it is so large.

When the Zaratan gets hungry, it is said to open its mouth wide as wide as it can and exhale a sweet smelling aroma. Fish are attracted to the pungent odour and swim in, and once the Zaratan’s mouth is full, it snaps its jaws shut, in a similar manner to that of a snapping turtle, consuming whole shoals of fish in one gulp.

An explanation for this enormous creature is the sighting of prehistoric turtles, such as the 4-meter long and 5-meter wide Archelon from late Cretaceous or the even larger Stupendemys from Cenozoic eras. Stupendemys is a less likely candidate, though, as it was a freshwater turtle. However, neither of these prehistoric beasts even came close to the size of an island, as Zaratan is described. Some may say that with the advent of modern technology it is a relatively simple matter to tell if some gigantic creature should breach the surface of the sea or not; this is one of the primary reasons of the doubt cast over Nessie’s existence. However, one must remember that less than 5 percent of our planet which is covered in water has been mapped to date, so the possibility of a gargantuan creature living quietly in the midst of the vast expanses of our unexplored - and largely unmonitored - oceans cannot be discounted. Whales are said to be able to sustain life, so it's possible a large one could eventually sustain an island-like enviroment. 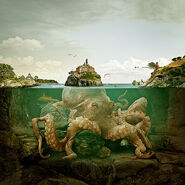 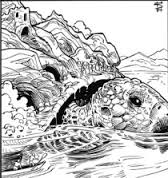 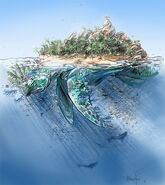 Zaratan in a Plesiosaur form 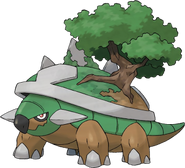 Torterra from Pokemon is based on this mythical creature.
Community content is available under CC-BY-SA unless otherwise noted.
Advertisement