The Zanzibar leopard (Panthera pardus adersi) is an elusive subspecies of leopard endemic to Unguja Island in the Zanzibar Archipelago, which is governed by Tanzania. Increasing conflict between people and leopards in the 20th century led to their demonization and determined attempts to exterminate them. Efforts to develop a leopard conservation program in the mid-1990s were shelved when wildlife researchers concluded that there was little prospect for the animal's long-term survival.

The natives' descriptions of the Zanzibar leopard portray it as a pet kept by witches which used it to do harm. The Zanzibar leopard was believed to be responsible for the killing of some livestock, where it was sent by a witch in order to disrupt a village.

As the human population of Zanzibar grew, they began to encroach more on the Zanzibar leopard's habitat. The increase in conflict with the leopards caused extermination campaigns that soon became widespread after the Zanzibar Revolution. One such campaign was led by Kitanzi Mtaji Kitanzi who hunted the leopards, which he believed were vermin, and brought people who he suspected were witches to custody. [1] By the 1990's many in the scientific community declared the Zanzibar leopard to be extinct.

The Zanzibar leopard has only been found on the island of Zanzibar, and its range seems to be restricted to the Jozani Chwaka Bay National Park due to human development. The Zanzibar leopard lives in the Northern Zanzibar-Inhambane coastal forest mosaic  ecoregion.

The Zanzibar leopard most likely has similar behaviors to the African leopard.

The Zanzibar Leopard most likely has a similar diet to its mainland relative where it eats primates and ungulates.

Some people who live in Zanzibar claim to have seen a Zanzibar Leopard. Others claim that the Zanzibar leopard has killed some of their livestock. In 2015, there are footprints that are made from a wild cat. In 2018, a trail cam took footage of what is believed to be a Zanzibar Leopard. The video was later shown on the television show Extinct or Alive.

The Zanzibar Leopard was featured on the television show Extinct or Alive. [2]

Black and white photo of only mounted specimen 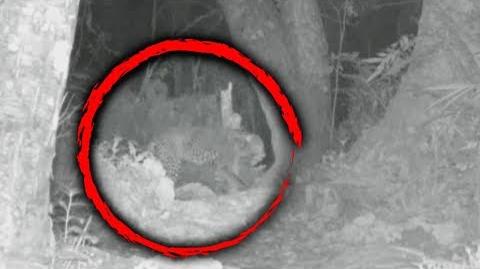