Yowie, also known as Yayhoo, Youree, Hairy Man, or Yahoo is a fanged humanoid marsupial or great ape, featured in Aboriginal mythology along with Australian Raptors, Bunyips and Burrunjor. The Yowie is considered to be the Australian Bigfoot, and contain many primate like features, possibly indicating that it is an undiscovered species of great ape (Gigantopithecus) or prehistoric human. The Yowie is described as being one of the most aggressive Sasquatch species, and has been reported tearing heads off of kangaroos and dogs. It has been seen attacking humans as well. However, that is rare.

The Yowie is described to be around 5 to 9 feet tall, with a large red mouth and talon-like claws according to Aboriginal legends. It is also noted that the Yowie contained two large fang-like canines which distinguish the Yowie from other Bigfoot species. It usually has brown or reddish fur.

Like most Bigfoot species, it is theorized that the Yowie descends from an ancient ape called Gigantopithecus Blacki. While the Giganto-Bigfoot theory may be valid, it is highly unlikely that the Yowie descends from the same Asian ape, as creatures from Asia never made it to Australia due to sea depth and vice-versa, creatures from Australia never made it to Asia. This separation is marked by the Wallace Line. Another theory is that they may be living Homo erectus, the presence of which in prehistoric Australia is suspected but not proven; or a particularly primitive tribe.

There are some 140 placental mammals known to exist in Australia, most belonging to the order Chiroptera(bats) and Rodentia(rodents). Some cryptozoologists theories that the Yowie could be some form of bipedal marsupial, such as a descendant of the New Guinean Hulitherium do to the fact there are no primates native(evolution wise) to Australia in the fossil record. 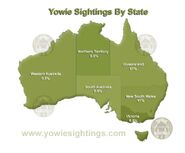 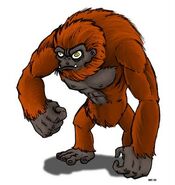 The Bombala Yowie, seen by Charles Harper in southeast Australia in 1912. This fanciful drawing is based on his description.
Español
Community content is available under CC-BY-SA unless otherwise noted.
Advertisement