The Yeren (Dinanthropoides chinensis) is a Chinese Bigfoot, variously referred to as the Yiren, Yeh Ren, Chinese Wildman or Man-Monkey. The Yeren is a mysterious primate living in the mountains of China, with most of the sightings coming from the remote Hubei province.

It has reddish brown hair (though very rare, sighting of white Yeren have been seen--this may indicate either albinism or elderly members of the species) and a large jaw. It is six to eight feet tall (in a few extreme cases they were reported to up to 12 feet tall), and is generally friendly but reserved around humans.

According to Xinhua, over 400 people have reported seeing the Yeren. The Chinese government has searched China to find the Yeren. Many footprints and hair traces have been found. However much like the Yeti or Sasquatch, the species has never been confirmed by scientists and remains in the realm of legend and cryptozoology. Despite its size, it is said to be less robust and stocky than its other relatives like Sasquatch.

None of the witnesses typically report the creatures to be covered in reddish colored hair. Some white specimens have also been sighted. Their height is estimated to range from six to eight feet, although some colossal examples allegedly in excess of twelve feet tall have been reported. The Yeren has a head shape more similar to humans than other apes (unlike the Sasquatch) with a sunken face, protruding lips covering large, horse-like teeth and a bulbous nose with upturned nostrils. Overall, it is smaller than the American Bigfoot. Like Bigfoot, the Yeren is peaceful and will generally quietly walk away when encountering people in the Zhejiang province.

Though the Yeren are generally thought of as nonviolent creatures, a news article surfaced in 1980 detailing the story of a woman who claimed to have been kidnapped by one. She spent twenty-seven days in the Hubei province and was at some point impregnated by the anomalous simian. The offspring died at age 22 twenty years before the article was released, and, astonishingly enough, a later analysis of his bones supposedly showed characteristics of both man and ape!

Cryptozoologist have drawn a link between the Yeren and the supposedly extinct Pongid Gigantopithecus, which formerly inhabited the general region. Another theory is that the Yeren is a misidentification of the endangered gibbon ape. It has also been suggested that the Yeren is actually a new species of orangutan, one that is ground-dwelling, bipedal and native to mainland Asia instead of Borneo or Sumatra.

Another theory is that the Yeren and possibly other similiar cryptids such as the Yeti and Sasquatch are closely related to humans. Some speculate they are a species of Hominin like Homo Erectus, Homo Neanderthalensis, Australopithecus Afarensis, or Paranthropus Boisei. 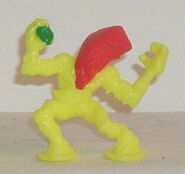 Yeren AKA "Wild Man of China" from Monsters in My Pocket 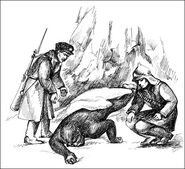 Gigantopithecus, a possible relative to the Yeren