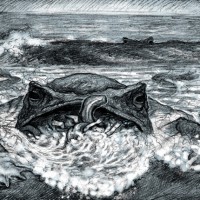 The Wuhnan Toads were said to be gigantic albino amphibians that lived in the remote Hubei Province of China in Bao Fung Lake. They are known for their atrocious appetite, and their size.

Local fishermen believed these toads lived in Bao Fung, along with several other lakes. Other than what they believe, and may have seen, there have been 2 major sightings.

Mortified fishermen were concerned about the safety of their families with these white-skinned creatures lurking in the deep. They tried to rid the land of these towering pests by throwing sticks of dynamite into the heart of the lake. This action only angered a more terrifying and evil toad, known by the local people as Chan. It proceeded to pursue the fishermen more than 90 feet beyond the shoreline.

Nine young scientists of Peking University launched an expedition to record these amazing animals on tape. The scientists proceeded to set up camp including top-notch video cameras. Shortly thereafter, 3 enormous creatures began slowly swimming up to the scientists on shore. The witnesses later described the creatures as toads with pale skin and a 6 foot wide maw. Their eyes sent shivers down the men's spines. As they stood there motionless and stunned, one of the animals released its massive tongue and snatched the tripod the camera was standing on and dragged it into its enormous mouth. After it finished devouring its inanimate prey, the creatures emitted a guttural shriek and plunged back into the depths.

Even with these fantastic sightings, there is not enough definitive proof to claim these magnificent creatures a thing of our dreams, or a thing of real life. No sighting has been recorded since the 1987 report. But no one knows what the future will hold....

A creature that appears to be a Wuhnan Toad appears in Alice: Madness Returns during the Chinese-inspired Oriental Grove. Here it is simply known as the Oriental Frog, as Alice does not know the proper name to call it (which is common for the character). The game's character gallery includes the following comment: "Quite possibly the largest frog I've ever seen, although maybe that was because I was shrunk by the Caterpillar's smoke. Solving his indigestion nearly gave me an upset stomach as well."

Retrieved from "https://cryptidz.fandom.com/wiki/Wuhnan_Toads?oldid=97935"
Community content is available under CC-BY-SA unless otherwise noted.