Cryptid Wiki
Register
Don't have an account?
Sign In
Advertisement
in: Asian cryptids, North America (Minus Mexico and Caribbean), European cryptids,
and 12 more

Wanderlights are atmospheric ghost lights seen by travelers at night, often in swamps, but some reports are also speaking of wanderlight-sightings on graveyards. It looks like a low hovering orb of light. It is known to recede when approached, leading the travelers from safe paths. There are many other names for wanderlights, including: Ignis fatuus (medieval latin for foolish fire), will-o'-the-wisp, hinkypunk and many more

The term "wanderlight" comes from the Dutch word "dwaallicht", in which dwaal /dʋaːl/ means wander, and licht /lɪxt/ means light.

The term "will-o'-the-wisp" comes from "wisp", a bundle of sticks or paper sometimes used as a torch, and the name "Will": thus, "Will-of-the-torch". The term jack-o'-lantern "Jack of [the] lantern" has a similar meaning.

In the United States, they are often called "spook-lights", "ghost-lights", or "orbs" by folklorists and paranormal enthusiasts.

Folk belief attributes the phenomenon to fairies or elemental spirits, explicitly in the term "hobby lanterns" found in the 19th century Denham Tracts. Briggs' A Dictionary of Fairies provides an extensive list of other names for the same phenomenon, though the place where they are observed (graveyard, bogs, etc.) influences the naming considerably. When observed on graveyards, they are known as "ghost candles", also a term from the Denham Tracts.

The names will-o'-the-wisp and jack-o'-lantern are explained in etiological folk-tales, recorded in many variant forms in Ireland, Scotland, England, Wales, Appalachia, and Newfoundland. In these tales, protagonists named either Will or Jack are doomed to haunt the marshes with a light for some misdeed.

One version, from Shropshire, recounted by K. M. Briggs in her book A Dictionary of Fairies, refers to Will the Smith. Will is a wicked Smith who is given a second chance by Saint Peter at the gates to Heaven, but leads such a bad life that he ends up being doomed to wander the Earth. The Devil provides him with a single burning coal with which to warm himself, which he then uses to lure foolish travellers into the marshes.

An Irish version of the tale has a ne'er-do-well named Drunk Jack or Stingy Jack who makes a deal with the Devil, offering up his soul in exchange for payment of his pub tab. When the Devil comes to collect his due, Jack tricks him by making him climb a tree and then carving a cross underneath, preventing him from climbing down. In exchange for removing the cross, the Devil forgives Jack's debt. However, because no one as bad as Jack would ever be allowed into Heaven, Jack is forced upon his death to travel to Hell and ask for a place there. The Devil denies him entrance in revenge, but, as a boon, grants Jack an ember from the fires of Hell to light his way through the twilight world to which lost souls are forever condemned. Jack places it in a carved turnip to serve as a lantern. Another version of the tale, "Willy the Whisp", is related in Irish Folktales by Henry Glassie. The first modern novel in the Irish language, Séadna by Peadar Ua Laoghaire, is a version of the tale.

In European folklore, these lights are said to be either mischievous spirits of the dead, or other supernatural beings or spirits such as fairies, attempting to lead travellers astray.

A modern Americanized adaptation of this travellers' association frequently places swaying ghost-lights along roadsides and railroad tracks. Here a swaying movement of the lights is alleged to be that of 19th- and early 20th-century railway workers supposedly killed on the job.

Sometimes the lights are believed to be the spirits of unbaptized or stillborn children, flitting between heaven and hell. Modern occultist elaborations bracket them with the salamander, a type of spirit wholly independent from humans (unlike ghosts, which are presumed to have been humans at some point in the past). Aristotle in his "History of Animals" states that the salamander is similar to the elemental spirit of fire and that it stays in fire without getting burnt. According to Paracelsus, the salamander is the elemental spirit of fire itself.

Aleya (or marsh ghost-light) is the name given to an unexplained strange light phenomena occurring over the marshes as observed by the Bengali people, specially the fishermen of Bengal. This marsh light is attributed to some kind of unexplained marsh gas apparitions that confuse fishermen, make them lose their bearings, and may even lead to drowning if one decided to follow them moving over the marshes. Local communities in the region believe that these strange hovering marsh-lights are in fact Ghost-lights representing the ghosts of fisherman who died fishing. Sometimes they confuse the fishermen, and sometimes they help them avoid future dangers.

Chir batti (ghost-light), also spelled chhir batti or cheer batti, is a yet unexplained strange dancing light phenomenon occurring on dark nights reported from the Banni grasslands, its seasonal marshy wetlands and the adjoining desert of the marshy salt flats of the Rann of Kutch near Indo-Pakistani border in Kutch district, Gujarat State, India. Local villagers have been seeing these sometimes hovering, sometimes flying balls of lights since time immemorial and call it Chir Batti in their Kutchhi–Sindhi language, with Chir meaning ghost and Batti meaning light.

Boi-tatá (Portuguese pronunciation: [bojtaˈta]) is the Brazilian equivalent of the wanderlight. Regionally it is called Boitatá, Baitatá, Batatá, Bitatá, Batatão, Biatatá, M'boiguaçu, Mboitatá and Mbaê-Tata. The name comes from the Old Tupi language and means "fiery serpent" (mboî tatá). Its great fiery eyes leave it almost blind by day, but by night, it can see everything. According to legend, Boi-tatá was a big serpent which survived a great deluge. A "boiguaçu" (a cave anaconda) left its cave after the deluge and, in the dark, went through the fields preying on the animals and corpses, eating exclusively its favorite morsel, the eyes. The collected light from the eaten eyes gave "Boitatá" its fiery gaze. Not really a dragon but a giant snake (in the native language, "boa" or "mboi" or "mboa").

In Argentina the wanderlight phenomenon is known as Luz Mala (evil light) or Fuego Fatuo and is one of the most important myths in Argentine and Uruguayan folklore. This phenomenon is quite feared and is mostly seen on Argentine rural areas. It consists of an extremely shiny ball of light floating a few inches from the ground.

Mexico has its own equivalent as well. Folklore explains wanderlights to be witches who transformed into these lights. The reason for this, however, varies according to the region. The swampy area of Massachusetts known as the Bridgewater Triangle has folklore of ghostly orbs of light, and there have been modern observations of these ghost-lights in this area as well.

Min Min Light is the name given to an unusual light formation that has been reported numerous times in eastern outback Australia. The lights have been reported from as far south as Brewarrina in western New South Wales, to as far north as Boulia in northern Queensland. The majority of sightings are reported to have occurred in Channel Country.

Stories about the lights can be found in aboriginal myth pre-dating western settlement of the region and have since become part of wider Australian folklore. Indigenous Australians hold that the number of sightings has increased alongside the increasing ingression of Europeans into the region. According to folklore, the lights sometimes followed or approached people and have disappeared when fired upon, only to reappear later on. 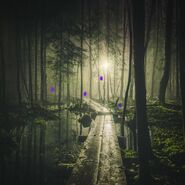 Will O' The Wisps from "Arthur Spiderwick's Field Guide to the Fantastical World Around you."
Community content is available under CC-BY-SA unless otherwise noted.
Advertisement