The Umibōzu (Sea Monk) is a sea spirit from Japanese mythology. It dwells in the ocean, usually emerging during storms, and sinks ships, particularly those whose crew speak about it. The name 'sea bonze' actually means 'Buddhist monk from the sea'. This (their bald heads, and the fact that they sometimes appear to be praying) leads many people to believe that they are actually the souls of drowned Buddhist monks. Alternatively, it's a yokai that appears to fishermen and castaways. They have skin that varies from grey to black, bald heads, a torso that appears to be made out of storm clouds, and serpentine limbs. Some accounts describe them as being covered in extremely fine hair, meaning they might be some sort of marine mammal. If they are in a particularly bad mood, they may ask for a barrel to fill with water to drown the crew. The only way to avoid this unfortunate endeavor is to give him a bottomless barrel. Although they are most commonly shown as enormous, they vary greatly in size, ranging from a few inches long, to the size of a mountain. Smaller specimens may cry out in pain if hit by oars, meaning it may be possible to fight them off if they attack, but your only chance of survival against a full-sized Umibōzu is to escape to shore before it reaches you. The small versions, sometimes thought to be juveniles of the same species, were occasionally caught in fishing nets, but not eaten. It is sometimes believed to be entirely made of water. There have been rare reports of somewhat small Umibōzu appearing in large numbers close to the shore. This is thought to possibly be some sort of odd mating ritual, but is bad for fishermen, as they avoid the water entirely, out of fear, when this happens. This can be devastating to small fishing villages, as they have no other way to get food or money. The Ningen, another cryptid, is sometimes believed to be this creature, but very rarely. There are also similar creatures in different areas of Japan, such as the Tate-Eboshi, found around the western island of Sado, and the Mojabune, found near Shiriyazaki, who locals attempt to ward off by pouring a mix of miso paste and water into the seas where it's found. The Umibōzu is very well known in popular culture of Japan. See below for examples. 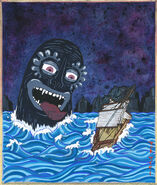