Cryptid Wiki
Register
Don't have an account?
Sign In
Advertisement
in: Flying and Gliding, Aliens, Cryptid Wiki,
and 21 more

Sometimes after an alien abduction, contact, and/or sightings people claim to see men in black attempting to silence them often threatening them with their life or safety. This has happened to various people who have seen UFOs such as the witness of the Solway Forth Spaceman.

In cryptozoology, the term UFO–or unidentified flying object–refers to a suspected alien spacecraft, although its definition encompasses any unexplained aerial phenomena. UFO sightings have been reported throughout recorded history and in various parts of the world, raising questions about life on other planets and whether extraterrestrials have visited Earth. They became a major subject of interest–and the inspiration behind numerous films and books–following the development of rocketry after World War II with Foo Fighters Appearing During WWII. 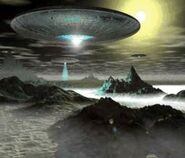 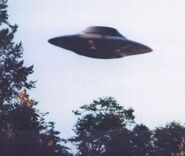