The U-28 Creature is not the name of an individual monster, but rather the name given to a single sighting of a yet to be identified beast.

This chance encounter with an animal that would later be referred to as the U-28 Creature took place in the early portion of World War I after a military engagement between the U Boat 28 and the British steamer Iberian. The Captain of the U Boat, Commander Freiherr George G. von Forstner, described the encounter in the following passage taken from his log books:

"On July 30, 1915, our U-28 torpedoed the British steamer Iberian, which was carrying a rich cargo across the North Atlantic. The steamer sank so swiftly that its bow stuck up almost vertically into the air. Moments later the hull of the Iberian disappeared. The wreckage remained beneath the water for approximately twenty-five seconds, at a depth that was clearly impossible to assess, when suddenly there was a violent explosion, which shot pieces of debris - among them a gigantic aquatic animal - out of the water to a height of approximately 80-feet."

"At that moment I had with me in the conning tower six of my officers of the watch, including the chief engineer, the navigator, and the helmsman. Simultaneously we all drew one another's attention to this wonder of the seas, which was writhing and struggling among the debris. We were unable to identify the creature, but all of us agreed that it resembled an aquatic crocodile, which was about 60-feet long, with four limbs resembling large webbed feet, a long, pointed tail and a head which also tapered to a point. Unfortunately we were not able to take a photograph, for the animal sank out of sight after ten or fifteen seconds."

One important thing to note about this encounter is the manner in which the captain recorded the encounter. In general submarine captains are not known to be prone to exaggeration, leading some to believe that he would not detail such an encounter in any other way but as it happened. Also there would be absolutely no reason to concoct such a fantastic story knowing, as we all do, that the majority of people who report strange encounters are generally looked upon as crazy and meet with only ridicule.

Some investigators have theorized that this encounter could indicate a surviving specimen of pliosaurs or mosasaurs, both of which are though to have resembled gigantic crocodiles. The fossil record of these creatures also seems to indicate that their spines were very flexible, which could account for the more serpentine like movement of the U-28 Creature and other so called Sea Serpents sometimes spotted in this area of the world.

There are also a handful of researchers who have suggested that this creature may have been being transported by the steamer, only to be released into the ocean when the ship exploded. This small number of investigators have stated that any creature swimming in the ocean would more than likely keep its distance for a naval battle and the subsequent sinking of a ship due to gun fire, and for the U-28 creature to have been blown out of the water upon the Iberian’s explosion the creature would have had to be swimming almost directly over the sinking ship, just seconds after it was sunk by torpedo fire. Though it is unclear why a British steamer would be transporting a 60 foot aquatic creature across the Atlantic.

It is safe to say that at this point in time the mystery of the U-28 Creature may never be solved, with all eye witnesses of the encounter having passed away and the Iberian resting at the bottom of the North Atlantic. Perhaps one day the discovery of a creature similar to that described by the crew of the U-28 may shed new light on this encounter, however we will still never know if that new discovery is what the captain reported that day or if something else, still unknown, lurks in the depths of the last great unexplored region of planet Earth, the ocean.

Or could it be a Mosasaurus? 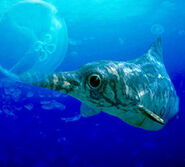 Or a large Ichthyosaur?

On September 2, 1915 the U-28 was damaged beyond repair in the North Cape after being hit by debris from the munitions ship, the Olive Branch, which exploded after an engagement with the U-28.