The Tsuchinoko (ツチノコ or 槌の子 , meaning "dirt child" or "child of hammer") is a snake-like cryptid from mountainous regions of Western Japan. These creatures are commonly reported as slithering deep within the watery caves of Shikoku and Honshu. Signs a tsuchinoko may be in your area include hearing a mouse-like squeak coming from a river, or in some cases, a seemingly human voice mimicking your conversations from the depths of a dank cave. They are reported to be between 30 and 80 cm long. The name "tsuchinoko" is used in Western Japan, however it is known as "bachi hebi" in Northeastern Japan. It has a total of 50+ names all over Japan.

Although there are some dependencies throughout the various sightings, the tsuchinoko is widely regarded to look like a very wide common snake with a central girth wider than its head and tail. Large, plate-like scales run down its body. It reportedly has fangs and venom similar to common snakes. Some accounts also describe the tsuchinoko as being able to jump up to a meter in distance followed immediately by a second jump while still in the air. It is also reported to sometimes swallow its tail and roll like a wheel, similar to the hoop snake. According to legend, some tsuchinoko are able to speak and are notorious liars. They are also said to have a taste for alcohol.

The tsuchinoko is also referenced in the kojiki, the oldest book about the history of Japan.

The tsuchinoko is a popular and well known cryptid in Japan, with many residents believing in it's existence or claiming to have seen it. On May 3rd an annual Tsuchinoko Festival is held in Higashishirakawa in Gifu prefecture where the roots of the legend can be traced. At this festival, participants go tsuchinoko hunting with a 1,280,000 yen (US$11,449) award for anyone who can find one.

The government of Yoshii, Okayama once offered a 20 million yen (US$200,000) award for the successful capture of a tsuchinoko. In June 1994, a man named Kazuaki Noda and his wife reported having coming across a huge snake with a thick body like a beer bottle and a head described as being like that of a tortoise. On May 8th 2000 a famer named Sugie Tanaka reported having come across two metallic coloured snakes with "tails like rats." In the same year in June, a woman named Mitsuko Arima reported a tsuchinoko swimming along a river. She describes her experience as follows: "I was surprised. I just pointed at it and asked ‘Who are you? Who are you?’ It didn’t answer me, but just stared. It had a round face and didn’t take its eyes off me. I can still see the eyes now. They were big and round and it looked like they were floating on the water. I’ve lived over 80 years, but I’d never seen anything like that in my life."

One notable case involves a farmer allegedly spotting the tscuchinoko while cutting grass. He described it as having a face similar to that of Doraemon (a popular Japanese cartoon character). He reported to have injured it with his weed whacker before the creature made it's escape. A few days later, an old woman discovered it's dead body laying by the side of a stream and buried it, not realizing how important it was. When word eventually got out, the local government sent out a team to dig it up and send it the local university for examination. The professor who examined the creature said it may be a tsuchinoko but “scientifically speaking, it was a kind of snake.” Many other bodies and shed skin have come forward but these are mostly thought to be from known species of snakes.

The sudden rise of sightings were caused by "Tsuchinoko Boom" which was caused by some books published on searching for this peculiar creature. The most famous is "Run away, Tsuchinoko" (逃げろツチノコ) which is a book about the author of it and his team and the sightings/incidents he investigated about the Tsuchinoko. Cause of this, old people started to talk about the snake. Even if someone saw a Tsuchinoko, it was a taboo to say you did as people believed they would be cursed.

Most tsuchinoko sightings are thought to be misidentified known species of snakes. It is also possible the sightings could be of snakes that have recently been fed giving them a bulging middle. They could also be misidentified sightings of blue tongued skinks, which are kept as pets by some Japanese people. It is possible they may have escaped their homes and were spotted by other people. If not, it is possible the tsuchinoko may be a new species of snake altogether.

However, the blue tongue skink misidentification theory can't explain most of the sightings until they became common in the pet trade. (they were first brought to Japan in 1970 but it was still very rare) Misidentifications of snakes can't explain the body shape of credible Tsuchinoko photos. 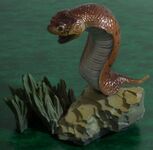