Cryptid Wiki
Register
Don't have an account?
Sign In
Advertisement
in: Canada, North America (Minus Mexico and Caribbean), Cryptid Wiki,
and 9 more

The city of Toronto once had numerous streams and waterways that, as the city expanded, were built over and became a network of underground waterways, buried beneath the city and merging with the sewer systems. The Algonquian tribes of Canada spoke of man-like hairy creatures that thrived in these rivers before they were hidden away from the public. In 1978, a similar monkey-like creature was sighted living in an underground tunnel in Toronto.

Memegwesi are small water spirits, usually said to inhabit rivers or riverbanks in Algonquian mythology. Their name is pronounced may-may-gway-see. Memegwesi are small riverbank-dwelling water spirits. They are generally benign creatures, but sometimes blow canoes astray or steal things when they are not shown proper respect. In some Ojibwe traditions, Memegwesi can only be seen by children and medicine people; in others, they can appear to anyone, and may help humans who give them tobacco and other gifts. Most often Memegwesi are described as being child-sized and hairy with a large head and a strange voice that sounds like the whine of a dragonfly. The Cree and Innu describe them as having narrow faces, and some Menominee storytellers have said that they have no noses. It is sometimes said that Memegwesi were originally created from the bark of trees. Memegwesi are said to carve symbols on rocks and sometimes carve small canoes for themselves out of stone. Some people believe that their name comes from the Ojibwe word for "hairy", memii, since Memegwesi are usually described as having hairy faces and bodies. Other people believe that their name is related to the word for butterfly, memengwaa. When Toronto buried many of it's river systems, luring them into underground tunnels, were the Memegwesi buried with them?

The Don, Humber, and Rouge rivers get all the glory, but Toronto is much more than a three-river town. Before John Graves Simcoe, when the land that would occupy the city was thick with trees and thickets and its soft soil was traversed by numerous streams and creeks that over centuries etched out deep ravines and sculpted rolling dales.

As early city builders would find, it's actually quite difficult to completely erase a river, and many of the waterways that once penetrated downtown Toronto still exist, re-routed into underground culverts or underground sewers, hidden from the public. Of all the rivers present in early Toronto, Garrison Creek was the biggest and hardest to cross. Its winding course and occasionally deep ravine proved a significant obstacle to the expanding city and substantial bridges were built at Dundas and Harbord streets, both of which have been buried but still stand.

Garrison Creek started north of St. Clair and headed directly south via Bloor and Christie under a half-buried bridge at Harbord - the stone wall on the north side of the street at Bickford Park is the bridge's parapet. It continued south, causing the weird dips and warped intersection on Crawford Street.

From there, Garrison Creek headed through Trinity Bellwoods Park, where there's another buried bridge under Crawford Street (the dog park is in part of the old ravine,) and out the southeast corner parallel to Niagara Street, where the river bank caused its distinctive arc. Garrison Creek drained into the Toronto Bay near Bathurst and Fort York Blvd.

Garrison Creek got its name because, when Toronto was young, it entered Lake Ontario just east of Fort York, the military garrison for the region. It is said that at that time, the mouth of the creek was suitable for mooring a few small boats.

The creek had its beginnings about 12,000 years ago when the last remnants of the Wisconsinan Glacier melted off the St. Clair West lands. The glacier had moved to and fro across this area for at least 60,000 years. It had wiped the land clear of forests and left deep deposits of glacial drift (sand, clay, gravel and stones) perhaps 200 feet thick. Post-glacial Lake Iroquois, the forerunner of Lake Ontario, washed against this pile of drift and created a steep bluff, the Lake Iroquois Shore Bluff, along what is now Davenport Road.

By the early 1900’s, settlement had become so dense and the creek so polluted with sewage and refuse that sewers became essential for public health reasons. By the mid 1920’s the creek had been completely buried. Well Garrison creek no longer exists, many of the other creeks and rivers are underground in the city's sewer system.

It was a warm summer’s day in August of 1978 when a Toronto area man had an experience with a strange creature that would forever change his life.

Ernest (he would only allow his first name to be used) was a soft-spoken 51 year old at the time of his harrowing experience. He and his wife of 19 years had been raising a litter of kittens. One of the kittens apparently disappeared and Ernest decided to search for it in the vicinity of their Parliament St. apartment. Closeby he stumbled upon the opening to a dark “cave” and crawled approx.10ft inwards. This is where he said, “I saw a living nightmare that I’ll never forget.”

Armed only with a flashlight Ernest encountered a creature of unknown origin. He described the monster as “long and thin, almost like a monkey, three ft long, large teeth, weighing maybe 30lbs with slate-grey fur.” However it was the eyes that truly stood out, “orange and red, slanted.”

Ernest spoke reluctantly with reporters as to what occurred next. The creature spoke to him. “I’ll never forget it,” he said. “It said, ‘Go away, go away,’ in a hissing voice. Then it took off down a long tunnel off to the side. I got out of there as fast as I could. I was shaking with fear.”

Ernest never approached the media with his story. He was afraid that people would think that he was “drunk” or worse “crazy” and felt that no one would ever believe him. “The (Toronto area newspaper) Sun found him after hearing about his experience from a reliable contact who worked with a relative of Ernest’s, one of the handful of people to whom he had confided the experience. He would agree to talk only if his last name was not revealed.”

“I believe Ernie saw exactly what he says he did”, said Barbara (Ernest’s wife). “He was terrified when he came back to the apartment and he doesn’t scare easily. Look, he’s been known to to have a drink in the past - like most people, and to occasionally tie one on, but he’s not a drunk and he wasn’t drinking at all that day.”

The Toronto Sun did question some of Ernest’s relatives and neighbourhood acquaintances. They found that all agreed with and supported Barabara’s evaluation of her husband.

Ernest accompanied by Sun staff returned to the location of his strange sighting in March of 1979. The cave’s entrance was located at the bottom of a narrow passageway between the building where he lived and the one next door. Together they found the corpse of a cat, which was “half-buried in the tunnel.” The sad discovery reminded Ernest of ‘strange noises, like animals in pain,” that he had heard emanating from the tunnel prior to his frightening encounter.

Ernest showed the Sun reporter exactly where he saw the strange being. He stated, “ The last I saw the creature it was heading off into the dark.” The passage seemed to drop down very quickly and go a long way back.

It was speculated that the the tunnel in fact led to the sewer system and that the entranceway beside Ernest’s apartment was “an access point used by the creature to the surface.” Safety concerns promoted Toronto’s Sewer Department to thoroughly inspect the tunnel as it was feared that area children may in fact try to enter it.

Ernest’s story was very strange, however sewage employees did not ridicule or scoff at it according to the report made by The Toronto Sun at that time. One worker who was quoted in the paper stated, “People who work on the surface just don’t know what it’s like down there. It’s a whole different world. Who would have thought a few years ago that people would live in sewers, and yet that’s what they found in New York a few years back. Another was quoted as saying, “I don’t know what he (Ernest) saw down there.” He also stated, “I’ll tell you one thing. If we could get in there, I sure as hell wouldn’t want to go down alone.”

It’s is interesting to note that the description of the creature provided by Ernest and an artist’s rendering which was included in the original Toronto Sun article resemble some current reports of another strange creature - the South American Chupacabara.

Sketch of creature based on artist’s rendition which accompanied the original Toronto Sun article.

The sewers beneath Toronto, showing how feasible a subterranean creatures' existence might be. 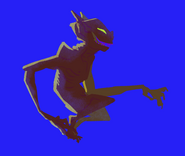