The Thylacine (Thylacinus cynocephalus), or better known as the Tasmanian Tiger or Tassie Tiger, is a dog-like marsupial that lived on the island of Tasmania and famous as the largest carnivorous marsupial in the modern times. Unlike Bigfoot, who is yet to be proven, there is evidence that the thylacine did in fact exist. Thylacines existed from New Guinea all the way to present-day Tasmania. When the aboriginals came to Australia 10,000 years ago, they brought along dingoes. Dingoes would compete with the thylacines for food and were also hunted as a food source by the aboriginals. 10,000 years ago, during the last Ice Age, Australia and Tasmania were linked to together. After the Ice Age, Australia and Tasmania were separated and Thylacines would live in Australia for the next 3,000 years and in Tasmania all the way to 20th century. In 1642, Abel Tasman will be the first European to discover the thylacines in Tasmania.

The first detailed scientific description was made by Tasmania's Deputy Surveyor-General, George Harris in 1808, five years after first settlement of the island. Harris originally placed the thylacine in the genus Didelphis, which had been created by Linnaeus for the American opossums, describing it as Didelphis cynocephala, the "dog-headed opossum". Recognition that the Australian marsupials were fundamentally different from the known mammal genera led to the establishment of the modern classification scheme,

In 1796, Geoffroy Saint-Hilaire created the genus Dasyurus where he placed the thylacine in 1810. To resolve the mixture of Greek and Latin nomenclature, the species name was altered to cynocephalus. In 1824, it was separated out into its own genus, Thylacinus, by Temminck. The common name derives directly from the genus name, originally from the Greek θύλακος (thýlakos), meaning "pouch" or "sack".

Several studies support the thylacine as being a basal member of the Dasyuromorphia and the Tasmanian devil as its closest living relative. However, research published in Genome Research in January 2009 suggests the numbat may be more basal than the devil and more closely related to the thylacine. 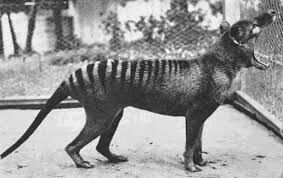 During the 1800s, when the first European settlers arrived in Tasmania, many of the sheep were found dead. Mysterious killings of sheep began to increase and the thylacines were blamed for the killings. So a bounty was put on the thylacines. Hunters began to hunt down the thylacines. This hunting of the thylacines continued on until 1909. Due to hunting and habitat loss, thylacines became extremely hard to find. Thylacines along with Tasmanian Devils were also eradicated from mainland Australia by Dingos and other similar animals, this drove them to flee to Tasmania.

Pushing to Protect the Thylacines

In 1928, committees, such as the Tasmanian Advisory Committee for Native Fauna, wanted the thylacines to be protected. Finally, in August of 1936, the thylacines were now protected by law.

In 1930, Wilf Batty shot and killed a thylacine. This thylacine would be considered the last known wild thylacine. In 1933, a thylacine by the name of Benjamin, was captured and sold to the Hobart Zoo. In September of 1936, Benjamin would die due to the negligence of volunteer zookeepers.

There have been many sightings since the death of Benjamin. With laws protecting the thylacines, they were considered to be critically endangered. With an increase of sightings, hunters were sent out to gather evidence of thylacines' continued existence. The more searches that were conducted, the same amount of failed attempts were made. In 1986, thylacines were declared extinct by the International Union for Conservation of Nature and Tasmanian government. Even after being declared extinct, sightings continues to increase. Sightings are seen in Tasmania, Mainland Australia and New Guinea.

Plans to clone a thylacine were made by the Australian Museum in 1999. In late 2002, scientists were able to extract DNA from a thylacine pup preserved in an alcohol container. In 2005, all plans to clone a thylacine failed after finding that the DNA was too badly degraded. In 2008, at the University of Texas, scientists were able to reconstruct a bone gene, which were from 100 year-old ethanol-fixed thylacine tissue samples from museums. Samples of the same bone gene were injected inside a mouse embryo, and it came back with surprising results. In 2013, plans to de-extinct many extinct animals, including the thylacine.

The Australian Rare Fauna Research Association reports having 3,800 sightings on file from mainland Australia since the 1936 extinction date, while the Mystery Animal Research Centre of Australia recorded 138 up to 1998, and the Department of Conservation and Land Management recorded 65 in Western Australia over the same period. Independent thylacine researchers Buck and Joan Emburg of Tasmania report 360 Tasmanian and 269 mainland post-extinction 20th-century sightings, figures compiled from a number of sources. On the mainland, sightings are most frequently reported in Southern Victoria. Some sightings have generated a large amount of publicity. In 1973, Gary and Liz Doyle shot ten seconds of 8mm film showing an unidentified animal running across a South Australian road.

Attempts to positively identify the creature as a thylacine have been impossible due to the poor quality of the film. In 1982 a researcher with the Tasmania Parks and Wildlife Service, Hans Naarding, observed what he believed to be a thylacine for three minutes during the night at a site near Arthur River in northwestern Tasmania. The sighting led to an extensive year-long government-funded search. In 1985, Aboriginal tracker Kevin Cameron produced five photographs which appear to show a digging thylacine, which he stated he took in western Australia. In January 1995, a Parks and Wildlife officer reported observing a thylacine in the Pyengana region of northeastern Tasmania in the early hours of the morning. Later searches revealed no trace of the animal. In 1997, it was reported that locals and missionaries near Mount Carstensz in Western New Guinea had sighted thylacines. The locals had apparently known about them for many years but had not made an official report.

In February 2005 Klaus Emmerichs, a German tourist, claimed to have taken digital photographs of a thylacine he saw near the Lake St Clair National Park, but the authenticity of the photographs has not been established. The photos were published in April 2006, fourteen months after the sighting. The photographs, which showed only the back of the animal, were said by those who studied them to be inconclusive as evidence of the thylacine's continued existence. In January 15, 2012, two brothers uncovered skeletal remains of what they believed to be a thylacine. The bones were taken back to experts and zoologists to observe the remains and compare them to any known animal. The results of the observation came back saying that the remains were from a domestic dog that died somewhere in the 1970s. The results were made by comparing the molar teeth of the found skull with that of another skull from a dog. However, the brothers were not convinced of the results so they set out to prove the scientists and zoologists wrong. When finally the brothers were proven right. It has been thought that we are looking in the wrong place. Most sightings occur in well-settled areas, but they might be more common in the nearly inhospitable wilds. The sightings occur when a thylacine wanders away in search of territory and passes through settlements. Not many go into the snake-infested mountains. Due to the uncertainty of whether the species is still extant or not, the thylacine is sometimes regarded as a cryptid.

In September of 2017, a man was filming the sunset in Australia when he noticed a creature bounding across the horizon. Upon further inspection, he realized that this was not a dog or a fox, and instead had a more slender body and rat like tail, very similar to the Tasmanian tiger. Over the next few days, many hunts for the animal commenced, but no thylacine was found 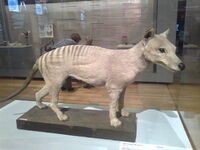 Thylacinus in Coat of Arms of Tasmania