Cryptid Wiki
Register
Don't have an account?
Sign In
Advertisement
in: Flying and Gliding, Cryptids, Theropods,
and 12 more

Unknown, Dates back to antiquity

The Thunderbird is a cryptozoological creature associated with large bird-like animals that live anywhere in Northern Canada and Alaska down to Central America. Similar animals often appear in Native American mythology; some tales tell of enormous eagles strong enough to carry whales back to their nests. Since pioneers began moving west across the North American plains, sightings of large birds have been reported. Similar stories appear from civilizations around the world.

Native tribes all across North America, especially along the Pacific coast and in the Great Lakes area, have stories depicting enormous birds of prey. Some stories told that these birds were so large and powerful that when they flapped their wings, thunder was created. Lightning flashed out of their eyes, and water fell off their backs, creating rain. The tribes used thunderbirds to explain some of the things that happened naturally, such as storms and other forms of weather. The legend of Passamaquoddies, for example, describes the quest of two Native Americans in search of the source of thunder high in the mountains. Other stories said that there was a thunderbird who battled an enormous killer whale. When the two beasts fought, they destroyed much of the land, knocking down trees and causing much destruction. Although dangerous and powerful beings, thunderbirds were also seen as benevolent nature spirits, and they sometimes assisted the tribes in their search for food during periods of famine. The igneous rocks known as thunderstones are the eggs of these creatures according to some legends.

The 1977 Lawndale, Illinois Thunderbird Attack was a reported attack by two unidentified birds on a young boy. The attack occurred on July 25, 1977. 10-year-old Martin Lowe was playing outside, when he was suddenly attacked by two large birds, one of which temporarily picked him up and carried him over 30 feet before Martin’s mother, Ruth Lowe, ran to her son’s rescue, chasing the birds away and then recovering her traumatized son.

Reportedly, several eyewitnesses had seen the attack take place. The birds were described as having a white ring around their necks, a 4 and a half foot body with each wing approximately four feet long, a six-inch hooked bill, three front claws, one back claw, and a large black body.

Sightings of large bird-like creatures have been reported for many years, at least since people began settling further west in the United States and Canada. One of the most famous reports is from 1890, where two Arizona cowboys claimed to have shot and killed a large bird. It was described as having no feathers, and it had the head similar to that of an alligator. The two men supposedly dragged the dead bird back to town after killing it. The report seems to suggest that this creature looked more like a pterodactyl or a dragon than any modern-day bird.

Today, Cryptozoologists usually refer to thunderbird legends the same way that they do with any flying cryptids, such as the kongamato, the roc, the ropen, and even sometimes the Jersey Devil. These flying creatures are often associated with modern-day pterosaurs; many of the encounters with the

creatures, including the Thunderbirds, are all described similarly. Quite often, the creatures are said to resemble pterosaurs, which were thought to be extinct for millions of years. 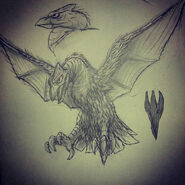 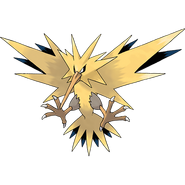 Zapdos, a Legendary Pokemon, takes basis from this cryptid.