The Thetis Lake Monster, or Canadian Lizard Man, is a cryptid that was sighted twice on Vancouver Island, Canada. The creature was first encountered by two teenage boys in 1972, and The Canadian Mounted Police sprung up an investigation from that. The monster was described as being an aquatic reptilian humanoid standing five feet (1.5m) tall, and resembled a human lizard with a large head that was covered in barbed spikes. Four days later, two men reported the same creature in the lake swimming, and stated that the lizard man was covered in silvery scales. In a week, a man reported that his pet Tegu lizard, an aggressive lizard that can grow four feet long, went missing. The police closed their investigation, stating that the lizard man was the lizard, however many locals still believe that the Thetis Lake Lizard Man is still alive in the lake. Thetis Lake was the first regional conservation area in Canada, and was established in 1958. It spans approximately 831 hectares of protected forest and parkland. Approximately 20 minutes from Victoria, and located next to the Old Island Highway and a regional trail, it is a popular spot for hiking, swimming, fishing, and boating.

However, on 22 August 1972, the Victoria Daily Times reported that two local teens claimed to have been chased from the beach at Thetis lake by a creature which roughly resembled Gill-man from the Creature from the Black Lagoon. One of the teenagers claimed to have been slashed on the hand by the creature, which displayed three webbed toes and fingers along with a barbed fins on its skull, arms, and legs, prompting an investigation by the Royal Canadian Mounted Police. It was described to be "roughly triangular in shape, about five feet (~1.5 m) tall and five feet across the base". At the time, the officer stated that "the boys seem sincere, and until we determine otherwise we have no alternative but to continue our investigation." Four days after the story was reported, two men claimed to have spotted the creature on the opposite side of the lake from its first appearance. According to one, "it came out of the water and looked around. Then it went back into the water. Then we ran!" The boys described the creature as "shaped like an ordinary body, like a human being body but it had a monster face, and it was scaly [with] a point sticking out of its head [and] great big ears." They believed the creature had a human-like face, although it appeared to have scaly and silvery-blue colored skin.

Unfortunately, 2 of the 4 witnesses came forward and claimed their sightings were hoaxes to get attention. Whether this is true of the remaining 2 witnesses remains in question.

Similar creatures have been reported from places such as Ohio, Delaware, Louisiana, and North Carolina, for at least the last century. They are said to be related to another cryptozoological creature, the chupacabra. Lake monsters like this one, are said to exist all over the world. Haida mythology from the Queen Charlotte Islands describes a similar creature, with a human-like face, two tails, and often wears a hat. This creature is often feared by Haida canoeists. 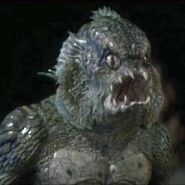