The Turner Beast is a creature that has been described as a husky-looking wolf with bulky shoulders, big eyes, a flat snout, short mangled ears, and a bushy tail. Before it was proven to be a hybrid, some researchers claimed that it could possibly be a Dire Wolf. It was spotted in Turner, Maine and was estimated to weigh about 120 lbs. It has been known to kill pets and livestock, mostly dogs, most likely for territorial reasons. Later DNA testing of the animal in the pictures revealed it to be a wolf-dog hybrid.

Close up of the head 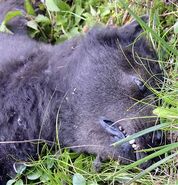 Add a photo to this gallery

If you visit the International Cryptozoology Museum at 11 Avon Street in Portland, Maine, you can see the foot of the Maine Mutant preserved in a jar. More information on the museum at [1]

Retrieved from "https://cryptidz.fandom.com/wiki/The_Turner_Beast_(Mutant_Canine)?oldid=109492"
Community content is available under CC-BY-SA unless otherwise noted.