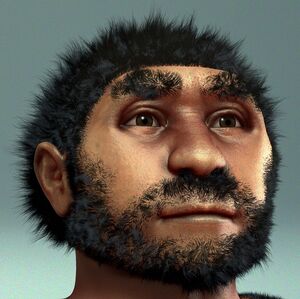 Bigfoot, Yeti, Sasquatch, Yowie. We all know these hominid creatures. Yet, few has ever known of the bushman, a Neanderthal/Erectus type of human. They aren't as hairy as Bigfoot, but smarter, shorter and denser. They live in cold mountainous regions down to South Carolina. Often hiding away from any sort of civilization. They're hard to spot because they can make deer-skin clothing and add all types of natural plants hence the name bushman. Native Americans say they can be more peaceful, or stealthy on the flatter, coastal zones, but more aggressive in mountainous and arctic zones. Early explorers are often scared of these beings, claiming they know pottery, and tool making, and simple things, yet they look way different.

They are reported to have strong, bulky jaws, more of an elongated head, broad nose, high voice in summer and spring, extremely deep voice in winter and autumn. Their pigment is described to be white and hair is similar to that of African American hair but longer. They have big chests, and are extremely strong. They have an interesting language of sounds which are bowls and other vocals. They have simple and advanced camouflaged clothes, making them excellent hunters.

According to some Native American legends, these humanoids were once like us but fell to isolation and were cursed by the Gods because of it. Ever since then, the humanoids have different relationships with humans. An explorer stated "I came to the white caped land, only to see a stranger with piercing eyes, shouting at me. With a thrust, he hit me in the leg. although odd looking, I knew I had to leave, or I would die." A later report stated "In the vast afar, northern mountains, an isolated human was practically invisible due to his camouflage." The latest report was in Greenland, a man was going to ride his dog sled to the nearest part store, which was approximately three hours away. About an hour into it, a random man, with a broad nose, big rib cage and elongated head jumped out and screamed as he took a dead carcass.

Many scientist believe that it is a sub-type of Homo Dinovisian. Which is when a

Neanderthal mates with Homo Sapien, instead Homo Erectus mated with a Neanderthal and that offspring mated with a modern human; thus creating Bushmen. Now, if they were the offspring of the three smartest living things to have ever existed, why haven't they gone ahead of us? Simply because they were isolated.

Are these a new evolutionary human? Are they the missing link? Do they isolate themselves so well that they can go under the radar? Possibly. One more question. Do you believe?