The mountains and forests of Japan have long been the domain of the legendary Tengu, one of the most famous and ubiquitous creatures in Japanese folklore. The Tengu was a bird-like creature of the sky and trees, and they were seen as a protector of the mountains. Tengu are related to similar folkloric creatures in China, and likely have some influence from the “Garuda,” a bird-man from Hindu lore that was later adopted by Buddhism as a protector deity. They were often said to favor Cryptomeria trees, which are known for their aromatic wood

Buddhism long held that the tengu were disruptive demons and harbingers of war. Their image gradually softened, however, into one of protective, if still dangerous,spirits of the mountains and forests. Tengu are associated with the ascetic practice known as Shugendō, and they are usually depicted in the distinctive garb of its followers, the yamabushi.

Powers of Wrath and Similarities with the Mothman

Tengu were said to be hatched from eggs, like birds, and stories abound of travelers coming across Tengu nests filled with their giant eggs high in the remote mountains. One egg was said to be enough to feed an entire family, but few would dare to disturb them for fear of the Tengu’s wrath. Tengu have been known to possess a wide array of supernatural powers, including teleportation, telepathy, premonition, thought projection (they were thought to

be able to invade a person’s mind and drive them insane), and shape shifting. When noticing the disasters the follow some Tengu sightings, there seem to be some parallels worth exploring between the story of the Tengu and that of another well known phenomenon, the Mothman, which was made popular in large part due to John A. Keel’s book, The Mothman Prophecies.

Not only do the Mothman and Tengu resemble each other in physical appearance, but there are also similarities between the transformation both creatures underwent from earlier to later versions. In the case of the Mothman,

there were the original eyewitness reports of a bird-like creature that later became the more humanoid, supernatural creature popularized by Keel. This later transformation into the more humanoid, paranormal, and generally more outlandish Mothman championed by Keel conflicted with the first eyewitness reports of winged creatures that could have been more grounded in cryptozoology. With Mothman, It seems likely that what started out as sightings of a possibly real animal became something more with Keel’s involvement and perhaps further embellishment by later eyewitnesses. It is also worth noting that in addition to the physical similarities between Keel’s Mothman and the humanoid “Yamabushi Tengu,” even some of the supposed supernatural powers later attributed to Mothman are mirrored in the Tengu. Like the later version of Mothman, Tengu were also at times considered harbingers of disaster. Although the time frames are different, it seems at least possible that

a similar process could have been at work in the gradual evolution of the Tengu from its animalistic “Karasu” form to the increasingly more humanized “Yamabushi” forms of later times. Both Mothman and Tengu started out as winged mystery creatures that were more bird-like in their beginnings, and both share the current popular image as flying, winged distinctly humanoid beings. As fantastic as these current versions may seem, could there have been a real animal at the core of the origins of both of these creatures, indeed perhaps even behind many of the other winged humanoids reported around the world?

If the story of Mothman could possibly have had its beginnings in sightings of a real animal, could the same not be true of Tengu? These similarities

between the transformation of Mothman from winged cryptid to paranormal winged humanoid, and that of Tengu from animalistic versions to more humanized versions, both possessing increasingly vast supernatural powers, are worthy of consideration. Even if the culprit was merely a large owl, as is often argued in the case of Mothman, there could be a similar influence on the early versions of Tengu as well. Japan is home to one of the largest species of owl, the Blakiston’s fish owl, which has a wing span of up to 180 cm (6 feet). Under the right circumstances, an owl this large

seems like it certainly has the potential to give rise to sightings that, in conjunction with Buddhist folklore and mythology brought over from China, could fuel stories of something like the Tengu. Although the Blackiston’s fish owl is found only in Hokkaido today, perhaps it once enjoyed a larger range in Japan that we are not aware of. There are also other species of owl in Japan, such as the long eared owl, and an exceptionally large specimen could possibly have had something to do with the early accounts of Tengu as well. It seems worth considering that there could have even been some currently unknown species of large bird at work.

Tengu are related to similar folkloric creatures in China, and likely have some influence from the “Garuda,” a bird-man from Hindu lore that was later adopted by Buddhism as a protector deity. 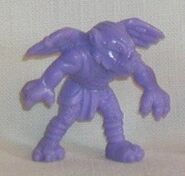 Tengu in Monster in My Pocket