Start a Wiki
The Teakettler (Urocyon iugulebesonia) is a “fearsome critter” from North American lumberjack tales originating in Minnesota and Wisconsin.

It resembles a small stubby legged dog with the ears of a cat.

It gets its name from the sound it makes, which is akin to that of a boiling tea kettle. It only walks backwards (apparently by choice) and steam emits from its mouth as it makes its whistle. Only a few lumberjacks claim to have seen one, as the creature is so shy, but if a boiling kettle is heard and nowhere to be found, it could be that a Teakettler is nearby.

An account is given by Jorge Luis Borges under "Fauna of the United States" in the Book of Imaginary Beings, a book that contains 120 mythical beasts of folklore and literature.

A sketch of a Teakettler.

Several Teakettlers doing what they do best. 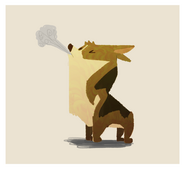 Add a photo to this gallery
Retrieved from "https://cryptidz.fandom.com/wiki/Teakettler?oldid=110497"
Community content is available under CC-BY-SA unless otherwise noted.