Tatzelwurm also called Alps Dragon is a cryptid reported in several areas in Europe, including Germany, Austria, Switzerland, Italy, and many other places in the European Alps for hundreds of years. It has several regional names including Stollenwurm, Springwurm, Arassas, Praatzelwurm and Bergstutzen.

Reports of this creature vary in description, from a serpentine reptile or amphibian, to a feline chimera, to something resembling a small Asian dragon. The most common description is of a lizard/snake-like creature with stubby appearance, two front legs without hind legs, completely covered with scales, and a cat-like face. The Tatzelwurm is also believed to be dangerously venomous; able to kill a human instantly with its bite, breathing poisonous fumes and even possessing acid blood.

The earliest documented encounter with a Tatzelwurm took place in 1779 when two of these creatures appeared in front of a man named Hans Fuchs. Badly frightened by his encounter Hans suffered a fatal heart attack, however before he died was able to tell his family of his encounter, he described the creature as 5 – 7 feet in length with a snake-like body, clawed front legs and a large feline-like head with sharp teeth.

In 1828, a peasant supposedly found the corpse of a Tatzelwurm which by the time he had managed to bring it home crows had apparently eaten half of the creature. Even so, the Tatzelwurm built up quite a following of believers and was even considered fact in the nineteenth century. Its now believed that even if this creature did actually exist that because sightings are so rare now it may be completely extinct.

Two other illustrations of the Tatzelwurm are known to exist; the first of which appeared in a Bavarian hunting manual called New Pocket Guild of the Year 1836 for Nature, Forest, and Hunting Enthusiasts. This manual contains what Bernard Heuvelmans describes as a curious picture of a sort of scaly cigar, with formidable teeth and wretched little stumps of feet. The second of these illustrations appeared in the Swiss almanac Alpenrosen published in 1841, and took the form of a drawing which shows a long scaly creature with two tiny front legs.

In late 1954, a Swiss photographer by the name of Balkin claimed to have photographed a Tatzelwurm. The level of interest produced by the photograph’s publication led the Berliner Illustrierte, a weekly illustrated magazine in Germany, to sponsor an expedition in search of the Tatzelwurm, however, the results of this winter expedition were disappointing and interest in the creature all but disappeared. Today the majority of cryptozoologists view the photograph taken by Balkin as almost certainly a hoax.

Another piece of evidence now considered to be a hoax was the discovery of a Tatzelwurm skeleton, said to have been mysteriously donated to the Geneva Institute of Science sometime in the 1900’s. The skeleton, only known by a single photograph, appears to be that of a long snake-like creature with two clawed arms and a larger than normal head. It is not certain who donated the skeleton or if it was ever donated to anyone at all. The majority of researchers believe the photograph, and the story behind it, to be a hoax.

There are many other tales of the legend of the Tatzelwurm. The first tale is that of a young girl who was working on a Swiss farm. While chopping down bean poles she accidentally disturbed the burrow of a Tatzelwurm and was attacked. The Tatzelwurm in this account was described as being of a gray coloration and about the size of a common domesticated cat with a fleshy hairless body and possessing only two front legs. According to the story the Tatzelwurm

glared at the girl and she ran away describing big bright eyes to intense to meet.


Another story tells that of a man and his son out gathering herbs in the mountains when the man suddenly heard his son scream and seemed to be paralyzed in fear staring at a rock. The man sprinted to his son only to see a ‘gruesome monster’ under the rock near his son which hissed like a snake and had the face of a cat with big bright eyes. The man managed to stab the Tatzelwurm with a sharped stick easily piercing the flesh. According to the story, the ‘green blood’ of the creature sprayed out and burnt the man's leg making his journey home long and painful due to his limp.

In July 1883 or 1884, Kaspar Arnold saw a Tatzelwurm on the Spielberg, near Hochfilzen, Tirol, Austria. He watched it from a mountain restaurant for twenty minutes and was certain it only had two legs.

A two-legged Tatzelwurm leaped 9 feet in the air toward two witnesses near Rauris, Salzburg, Austria, in the summer of 1921. It was gray, about 2–3 feet long, and had a head like a cat.

In 1924 the five-foot-long skeleton allegedly was found by two men, who said it resembled a lizard’s.

In 1934, a Swiss photographer named Balkin claimed to have photographed a Tatzelwurm near Meiringen, Switzerland, but his photo was probably a faked image of a ceramic fish.
In the summer of 1969, a local man reported a 30-inch-long animal with two hind legs near Lengstein, Trentino-Alto Adige, Italy. It seemed to be inflating its neck.

In 1990, two naturalists found the skeleton of a lizard-like animal in the Alps near Domodossola, Italy. Giuseppe Costale saw a gray, crested reptile moving in a zigzag fashion on Pizzo Cronia in the same area on two occasions, in October 1991 and September 1992.

In the 1960′s a photograph emerged which was supposedly taken of the mysterious creature. This was given to a Geneva newspaper from a source unknown. Most researchers and cryptozoologists who have seen the photo are in agreement that it is probably a hoax – most likely by a mayor of a Bavarian town attempting to attract tourists.

In 1970, reports of an alleged Tatzelwurm were published in the Swiss newspaper La Tribune de Geneve by Georges Hardy.

In 2000 a strange skeleton was forwarded to a local college. Some scientists said at the time is the first physical proof of the Alpine Tatzelwurm. Along with the skeleton came a sizable donation as well. The original owner of the skeleton remains a mystery. The law firm of Gunterhaus Ltd. in Germany handled the donation and refuses to divulge the name of the contributor or why the Geneva Institute was selected to be the recipient.

2009, many reports were made in the Tresivio area of Italy, near the Swiss border. Authorities chalked up most of these reports to "missing monitor lizards" that had escaped their masters. Some of the sightings were even said to be of "raptor" dinosaurs! Only the oldest residents of Tresivio called the mysterious creatures by the name they always knew them as..."basilisco" or basilisk. That was the Italian name for Tatzelwurm.

but Tatzelwurm sightings have continued to the present day, and German cryptozoological researcher Ulrich Magin has published several articles in Fortean Times and his own magazine Bilk documenting them.

The question still remains what is or was the Tatzelwurm, it is widely believed that the Tatzelwurm is actually some kind of rare salamander with characteristics resembling a Gila Monster, most notably the preferred habitat of underground burrows in mountainous areas. This could also explain the reports of poisonous fumes as the Gila Monster is extremely venomous and one of the worlds only venomous lizards, though it is not native to the region. The description of the Tatzelwurm even fits that of a Gila Monster even if it is somewhat of a loose fit. Another theory is that this creature could be some kind of giant skink, although skinks are also not native to the Alps.

The Tatzelwurm is said to have normal hibernation periods; sleeping during the winter in crevices on mountainsides (this is the reason for the name “Stollenwurm”) or they will even sometimes sleep in hay in a hay loft. In the following two centuries, many reports were received about a strange monster lurking in the Alps and attacking the livestock of farmers in remote villages. 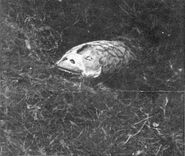