The stoa is a theropod-like cryptid reported from Kurupira tepui, South America.

It's a 20-25 feet long animal that walks on its big legs. The hands of stoa are pretty small. Stoa has short, but tall head with two horns on it. The arrow-proof gray skin of it is covered with hard scales. Stoa's prey are tapirs and capybaras, but it can also eat humans. The physical description matches with dinosaur carnotaurus - an abelisaur from South America.

A military squad was camping around the lake, when they heard the natives screaming "Stoa!". A lot of them ran to the cave, military squad joined them too. A pack of Stoa appeared from the woods and started leaping on the people to kill them. Military squad's rifles didn't do any damage to the beasts. Only two Stoa's has been killed with poison arrows. Later, the natives ate them. 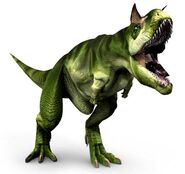 Another picture of carnotaurus.

Artist's rendering
Add a photo to this gallery

Retrieved from "https://cryptidz.fandom.com/wiki/Stoa?oldid=100383"
Community content is available under CC-BY-SA unless otherwise noted.