Steller's Sea Ape, or Simnia marina danica as it was tentatively dubbed in Latin, is a marine cryptid described from only a single sighting by explorer Georg Wilhelm Steller, on August 10, 1741, in waters off the Shumagin Islands, Alaska.

Steller described the animal as about 5 feet (roughly 1.5 meters) long, with a head similar to that of a dog. It had large eyes, ears which were pointed and stood erect, and long whiskers. Its tail resembled that of a shark, but it had no forelimbs. Its body was covered with thick grayish hair, whilst its abdomen was a reddish-white in color. Steller recalled that it resembled an animal illustrated by Conrad Gesner which had been called Simia marina, Latin for "sea ape". 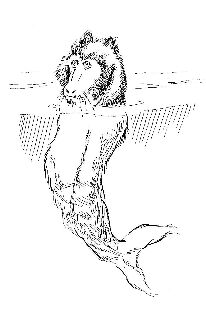 Steller wrote that the animal rose its front end out of the water to observe the ship, and engaged in an amusing juggling behavior with a piece of seaweed. Steller attempted to shoot the animal with a gun but missed it. The ship's log did not note the sea ape encounter, and Steller's 1742 governmental report made no mention of it, nor did he include a description of the creature in his De Bestiis Marinis (‘The Beasts of the Sea’).

Sailor Miles Smeeton records an entry in his book, Misty Islands, of an encounter with an animal while sailing in the Aleutians Islands in 1969. His description is remarkably similar to Steller's. The beast was seen by himself, his daughter, and a friend. They had no idea what the animal was at the time, but after reading the description by Steller some time later, they felt it closely matched their own observations.

According to biographer Dean Littlepage, a young Northern fur seal (Callorhinus ursinus) appears to be the most likely explanation for the sighting. Their forelimbs are set far enough behind on their torso so that they could have been obscured below the waterline, and the "shark-like" tail of the creature may have been the animal's hind flippers. Steller had already been familiar with fur seals, but Littlepage suggests that the poor lighting conditions during the lengthiest encounter of a probable juvenile fur seal could account for the misidentification.

Another explanation that the sea ape might be a congenitally malformed fur seal.

Another explanation is that it is a joke from steller, on his captain, whom we had an awful relationship with, the whiskers look very similar to the beard of the captain and due to stellers unexpected death he was not able to clarify that it was a joke, hence thats why it did not appear in his main journal.