Cryptid Wiki
Register
Don't have an account?
Sign In
Advertisement
in: Flying and Gliding, Supernatural, Humanoids,
and 13 more

"So named because of his apparent ability to bound effortlessly through the air, Spring-Heeled Jack was greatly feared by residents of suburban London during the 1830s. A diabolical, super-villain of sorts, he was usually described as being tall, thin, and cloaked in a tight-fitting oilskin suit, as well as a flowing cape. Jack first gained notoriety when he began to accost solitary, young women by ripping at their clothing with steely claws while he breathed noxious, blue flames into their faces. To this day, no one is sure of Jack’s true identity, nor from where this notorious scoundrel came."

Sightings continue, and it is gaining more fame.

Spring-Heeled Jack is a cryptid that was sighted in England.

The first accounts of Spring-Heeled Jack were made in London in 1837 and the last reported sighting is said in most of the secondary literature to have been made in Liverpool in 1904.The first report of Jack was from a businessman returning home late one night from work, who told of being suddenly shocked as a mysterious figure jumped with ease over the high railings of a cemetery, landing right in his path. No attack was reported, but the submitted description was disturbing: a muscular man with devilish features including large and pointed ears and nose, and protruding, glowing eyes.

Perhaps the best known of the alleged incidents involving Spring Heeled Jack were the attacks on two teenage girls, Lucy Scales and Jane Alsop. The Alsop report was widely covered by the newspapers.

Jane Alsop reported that on the night of February 19, 1838, she answered the door of her father's house to a man claiming to be a police officer, who told her to bring a light, claiming "we have caught Spring-Heeled Jack here in the lane". She brought the person a candle, and noticed that he wore a large cloak. The moment she had handed him the candle, however, he threw off the cloak and "presented a most hideous and frightful appearance", vomiting blue and white flame from his mouth while his eyes resembled "red balls of fire". Miss Alsop reported that he wore a large helmet and that his clothing, which appeared to be very tight-fitting, resembled white oilskin.

Without saying a word he caught hold of her and began tearing her gown with his claws which she was certain were "of some metallic substance". She screamed for help, and managed to get away from him and ran towards the house. He caught her on the steps and tore her neck and arms with his claws. She was rescued by one of her sisters, after which her assailant fled.

Mary Stevens: In October 1837, Mary Stevens, while on her way to Lavender Hill through Clapham Common, was attacked by a cloaked figure who first leapt at her, then while gripping her firmly to bar movement, sexually assaulted her and tore off her clothes. As the girl screamed in horror, the assailant fled from the scene and despite a thorough search no trace of him was ever found.

The very next day Spring-Heeled Jack was seen in Mary's neighborhood, where he jumped before a coach, causing the coachman to lose control and meet with an accident. He then gave out a horrific shriek of laughter and made his getaway by jumping over a 9 foot high wall.

Cowan's Announcement: As the victims of Jack grew in number, Sir John Cowan, the Lord Mayor of London, made a public announcement in which he read out a lengthy complaint from a concerned citizen which included various accounts of Jack's assaults.

Jane Alsop: The first was Jane Alsop, who was in her father's house on the night of 19th February when there was a knock at the door and a voice called claiming to be a policeman, asking her to bring a light as he had caught Spring-Heeled Jack in the lane. As she opened the door, she saw a cloaked figure waiting there. On handing over the candle to him, the man suddenly threw off his cloak, revealing "a most hideous and frightful appearance". With fiery eyes, he vomited blue and white flames on to Jane's face, and then tore off her gown and inflicted bloody scratches on her neck and arms with his ice-cold metallic claws. But Jane's sister appeared and Jack fled.

Lucy Scales: Again on 28th February, Lucy Scales, 18, was returning with her sister from their brother's house in Limehouse. As they were passing the Green Dragon Alley, Lucy came across a man in a large cloak, who unexpectedly spurted out some blue flame onto her face, disabling her sight and triggering violent fits which continued for hours.

All the while, The Times, a British daily newspaper, helped spread the legend by reporting the incidents.

Aldershot Barracks: In August 1877, at the Aldershot Barracks in North Camp, Central Road, a sentry came across a strange figure who advanced towards him and slapped him several times on the face. A guard shot at him, but with no avail. The figure then disappeared mysteriously with astounding leaps.

Liverpool: In 1888 in Everton, north Liverpool, Spring-Heeled Jack was seen on the rooftop of Saint Francis Xavier's Church in Salisbury Street.

In the 1970s, the inhabitants of Attercliffe in Sheffield complained about a red-eyed figure who punched women. He was rumored to jump between rooftops and walk down on the sides of walls.

In South Herefordshire, a salesman named Marshall had encountered in 1986, a man who took gigantic leaps and slapped him on the road.

In February 2012, Scott Martin and his family were travelling in a taxi when they saw a dark figure run across the street and climb a roadside bank in seconds near Nescott College in Ewell bypass.

Here are some of the reports which indicate that Jack may actually have extended his menace to the American continent:

Ghost of Raymond Street: In 1892, a seven to twelve feet tall phantom, dressed all in white, with horns on its head, was seen spitting fire in the vicinity of the jail in Raymond Street in Brooklyn, New York.

The Ghost of Wading River: At exactly 11:55 p.m. Every night, a spectre appears at the churchyard near Wading River, Long Island, jumping here and there trying to read inscriptions on the tombstones. When the clock strikes 12, the ghost positions himself atop a stone and spurts out 12 fire balls, after which he disappears into mist.

From Jekyll and Hyde 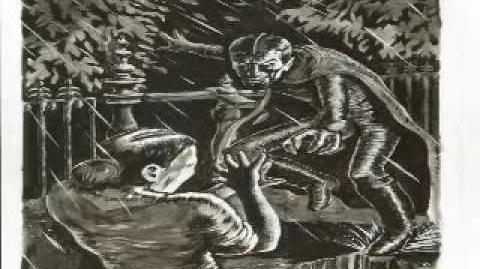 The Tale of Spring-Heeled Jack