The Spiny-Backed Chimpanzee is a bizarre creature reported from the Democratic Republic of Congo. It is described in a short account that appeared in Philippe Coudray's self-illustrated book "Guide des Animaux Cachés" (2009).

According to Coudray, a member of a unit from the United States Navy who wishes to remain anonymous has claimed that during a mission to the Democratic Congo sometime between 1997 and 2002, the unit's team encountered 13 bipedal chimpanzees that were attempting to kill another animal. Standing 4.5-5 ft high, they were uniformly gray in color, but by far their most distinctive feature was the series of spines running down each chimp's back, which stood up like porcupine quills whenever the chimps became agitated.

Coudray also stated that the team actually shot a three-minute video film of these extraordinary apes, but that it remains a military secret. The precise location of this sighting is unknown, but as the team was from the US Navy and the Democratic Congo is virtually landlocked, it may have been somewhere close to Lake Tanganyika.

The possession of genuine spines by these apes seems highly improbable, but perhaps they sported distinctive manes or even erectile tufts of hair that superficially resembled spines. Moreover, manes have also been reported from certain other bipedal crypto-primates, including the Batutut of Borneo.

Among known primates, the only species that can in any way be described as spiny is a small loris-related African prosimian known as the potto (Perodicticus potto). Its neck bears a series of small tubercles covering its elongated cervical vertebrae, which have sharp points and almost pierce its skin, and are utilized as defensive weapons.

However, such an identification would contradict much of the report, notably the bipedal nature and size, among other things. As such, some argue the entire story was a hoax, and no such creatures exist at all. 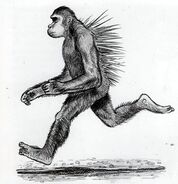 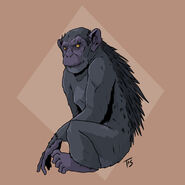