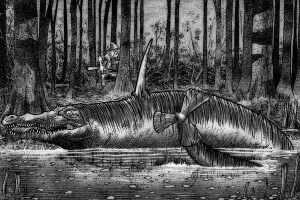 The Snoligoster (Dorsohastatus caudirotula) is a long amphibious creature from lumberjack folklore of North America, known as a fearsome critter. It dwells in swamps in the south, but it is especially common around Lake Okeechobee, Florida. The Snoligoster will eat any meat, but it prefers human flesh. When it catches someone, it will use its tail to toss the unfortunate victim onto the spike on its back (it will store the carcasses on its spike until it is hungry). Once it is ready to eat, it will drill a hole in the ground with its propeller tail, and scrape the bodies off of its spike into the hole. It will then proceed to grind the unlucky victims into a pulp, and then inhale and/or drink them. Sometimes the Snoligoster will just use its tail as a club to batter targets too evasive to stab.

In the 2015 remake of Fearsome Creatures, the Snoligoster now has a diet consisting of shadow flesh from its human victims. It lives in the swamps of Florida, Georgia and Louisiana. Its tail is now a different rotor but it keeps the large curved horn on its back and its head is crocodilian. Surprisingly, the Snoligoster has a tasteful sense of lighting and the pictures of the beast impaling its victims sold well on nickel postcards, and apparently, the Snoligoster is very smart, because it knows the difference between a good shadow and an evil shadow, an if the Snoligoster impales and kills an evil person, the Snoligoster eats the evil shadow, so you won't feel bad and you will be just fine. The scientific name is Rotorcaudus dorsocerus.

The Snoligoster is a large, crocodilian creature. The three unique things about the Snoligoster are the fact that it has no legs (or fins), it has three bony plates on its tail (almost exactly like a propeller), and it has a big spike on its back. The creature just wiggles its tail back and forth, causing the propeller like plates to spin, enabling the creature to move through the dense swamps. Its also is covered in long, thick hair. It is about as long as three normal sized men lying down.

Mr. Inman F. Eldredge was hunting a runaway slave in the swamps of Florida. He saw the slave, dead and impaled on what he first thought to be a skinny Cyprus tree. Suddenly, the tree started to walk away. Eldredge then promptly ran away. Even when the public knew about the Snoligoster, they still decided to leave it alone, so that it would be a warning to all the evil-doers and runaway blacks not to hide in the swamps.

"The Snoligoster" from Fearsome Creatures of the Lumberwoods (1910) by William T. Cox