Cryptid Wiki
Register
Don't have an account?
Sign In
Advertisement
in: Cryptids, North America (Minus Mexico and Caribbean), Carnivore,
and 8 more

On May 24, 1996, a bizarre dog-like beast called Snake-Headed Dog or Snake Dog (4-5 ft in total length, but with a sleek serpentine head, red reptilian eyes, a slender 24-30-in neck, shaggy black fur, long hind limbs, shorter forelimbs, and no tail at all) ran out in front of the car driven by Sheila Charles as she was taking her son Shane to school in Magalia, California. She swerved to avoid hitting the creature, and veered out of control into a canyon. Fortunately, nobody was badly injured, and the mysterious beast was later confirmed by the driver of the car following her, who had seen it as well. 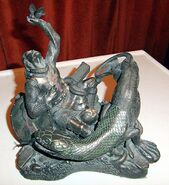 A photoshopped image of the creature