The Slide-Rock Bolter (Macrostoma saxiperrumptus) is a bizarre creature recounted by the lumberjacks of North America during the 19th and early 20th centuries. It is believed to live in the mountains of Colorado, but this beast only lived in the mountains where the slope was more than a 45-degree angle. It has an immense head, with small eyes, and a large mouth. It has a tail ending in a fluke like a dolphin, with enormous grab-hooks.

All day long this creature will just wait for a tourist or helpless creature below it. At the right moment, it will lift its tail, thus loosening its hold on the mountain, and descend rapidly down the slope. With the beast’s mouth wide open it would swallow all that got in its way. Whole parties of tourists are reported to have been gulped up in one scoop by taking parties far back into the hills. Its body is also so large and strong that trees in its path are broken and destroyed. Its own impetus carries it up the next slope, where it again slaps its tail over the ridge and waits.

In the mountains of Colorado, where in summer the wood are becoming infested with tourists, much uneasiness has been caused by the presence of the slide-rock bolter. This frightful animal lives only in the steepest mountain country where the slopes are greater than 45 degrees. It has an immense head, with small eyes, and a mouth somewhat on the order of a Sculpin, running back beyond its ears. The tail Consists of a divided flipper, with enormous grab-hooks, which it fastens over the crest of the mountain or ridge, often remaining there motionless for days at a time, watching the gulch for tourists or any other hapless creature that may enter it. At the right moment, after sighting a tourist, it will lift its tail, thus loosening its hold on the mountain, and with its small eyes riveted on the poor unfortunate, and drooling thin skid grease from the corners of its mouth, which greatly accelerates its speed, the bolter comes down like a toboggan, scooping in its victim as it goes, its own impetus carrying it up the next slope, where it again slaps its tail over the ridge and waits. Whole parties of tourists are reported to have been gulped at one scoop by taking parties far back into the hills. The animal is a menace not only to tourists but to the woods as well. Many a draw through spruce-covered slopes has been laid low, the trees being knocked out by the roots or mowed off as by a scythe where the bolter has crashed down through from the peaks above. A forest ranger, whose district includes the rough county between Ophir Peaks and the Lizzard Head, conceived the bold idea of decoying a slide-rock bolter to its own destruction. A dummy tourist was rigged up with plaid Norfolk jacket, knee breeches, and a guide book to Colorado. It was then filled full of giant powder and fulminate caps and posted in a conspicuous place, where, sure enough, the next day it attracted the attention of a bolter which had been hanging for days on the slope of Lizard Head. The resulting explosion flattened half the buildings in Rico, which were never rebuilt, and the surrounding hills fattened flocks of buzzards the rest of the summer.

In the 2015 remake of Fearsome Creatures, the Slide-Rock Bolter is now an enormous land fish weighing 25,000 pounds living in Colorado with fins and a hooked caudal fin and three chitinous razor sharp toothed guzzards. It is vulnerable to leprosy. Apparently, the Slide-Rock Bolter is an apex predator, and despite its destructive habits, its behavior is also used to scare away the other predators haunting Colorado, which are the wolves, the spider wolves, the overwolves and a renegade Hodag. The scientific name is Leviathanetta mucopuruluntius.

"The Slide-Rock Bolter" from The Fearsome Creatures of the Lumberwoods (1910) by William T. Cox 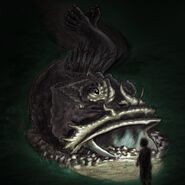