The Skunk Ape or Myakka Ape is a bipedal humanoid, possibly a Bigfoot, reported in the South Eastern United States including Texas, Georgia, and Louisiana, but most notably in the Florida Everglades.

It has black fur and glowing red eyes, unusual for most primates because most primates lack a tapetum lucidum, a layer of tissue behind the retina that reflects light.

The Skunk Ape's most obvious character is its terrible odor, which gives it its name.

The first-ever sightings of the Skunk Ape were reported throughout the 1960s and 1970s. In autumn of 1974, many reports were filed in Dade County, Florida.

Twenty-six years later, in the autumn of 2000, the police of Sarasota County, Florida received a letter from an anonymous woman. With the letter were two attached photographs of what the woman said was an escaped orangutan who had been stealing apples from her back porch for three nights. These photos were later found to be taken near the Myakka River. After the images were released to the public, cryptid enthusiasts dubbed the creature in the photograph the "Myakka Skunk Ape."

Most sightings of the Skunk Ape, like Bigfoot sightings, can be dismissed as black bear sightings. A black bear can stand upright, making it appear like another animal entirely. Bears are also known to rummage through garbage bins, which could explain the smell so associated with this creature.

The United States National Park Service considers the Skunk Ape to be a hoax.

On October 28, 2013, a video titled "I think I saw a skunk ape - please help" was uploaded to YouTube. It depicts a large, hairy humanoid creature crouching in the water and pulling bark off a tree with ease.

In December 2007(season 1, episode 9), an episode of MonsterQuest was made about the skunk ape. The episode 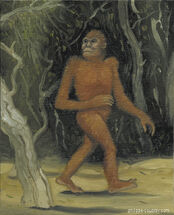 An artist's portrayal of the skunk ape 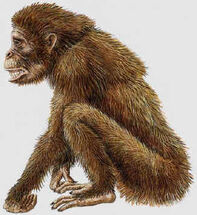 A miscellaneous primate somewhat similar to the skunk ape. 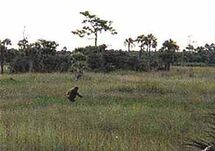 A supposed photo of a skunk ape.

The Skunk Ape compared to a yeti and an orangutan 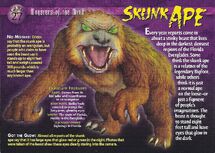 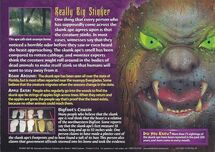 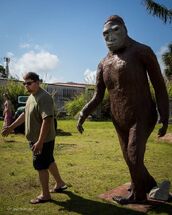 Statue of The Skunk Ape

The First Photo of the Skunk Ape

The Second Photo of the Skunk Ape 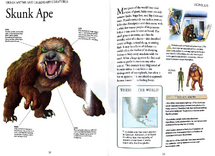