In many Native American legends, a skin-walker (or skinwalker) is a person with the supernatural ability to turn into any creature they desire. To be able to transform, legend sometimes requires that the skin-walker wears a pelt of the animal. In most cases, this pelt is not used in modern times because it is an obvious sign of them being skin-walkers. It's a common theme found throughout cultures all over the world and is referred to as shapeshifting by anthropologists. These creatures are sighted interestingly a lot now-a-days.

Many Native Americans dislike the fact that Skin-walkers appear in modern media, because of the superstition that mentioning them might cause them to hunt the mentioning person down. This is the same reason why they don't like talking about them with not-Natives.

The ’ánt’įįhnii (practitioners of witchery) are people who have received supernatural power by breaking a cultural taboo. Upon initiation of ’ánt’įįhnii, a person is said to gain the power to become a yee naaldlooshii (which means "with it, he goes on all fours" in the Navajo language). This is done via a dance/song ceremony used to curse instead of to heal. Although both men and women can become ’ánt’įįhnii, men are more commonly initiated. It is generally thought that only childless women can become witches. Not every witch is a skin walker, but every skin walker is a witch.

In some stories, people who have attained the highest rank are called clizyati, which means pure evil. This can be achieved by killing a close blood relative, incest, necrophilia, or other culturally taboo and evil acts. Upon completing one or more of these acts is said to destroy their humanity and allow them to become fully initiated in the way of witchery.

Although a skin-walker is most frequently seen as a coyote, wolf, fox, eagle, owl, or crow, the Yee Naaldlooshii is said to have the power to assume the form of any animal they choose, a decision based on what specific abilities are needed. For example, a skin-walker may use a bird form for expedient travel in pursuit, escape, or otherwise. Some Navajo also believe that skin-walkers have the ability to steal the face of a person. Skin-walkers are commonly believed to be the color white while in animal form. This is how many distinguish a skin-walker in animal form from a regular animal. The Navajo believe that if you ever lock eyes with a skin-walker, they can absorb themselves into your body. Alternately, some Navajos believe that if you make eye contact with a skin-walker, your body will freeze up with fear, and the skin-walker will use that fear to gain power and energy. Skin-walkers, like many other malevolent legends, gain power from a victim's fear. It is said that to say “Skin-walker” out loud will attract them to you; as if you’ve been marked. To say their name aloud is to invite them to yourself.

Skin-walkers are usually very hairy in their human form, and often wear animal pelts. Some Navajos describe them as a perfect version of the animal in question. The skin may just be a mask, which are the only garments worn in the initiation ritual. Since skin-walkers are shunned and despised, numerous attempts have been made to hunt and kill a skin-walker. They are not usually successful however. Sometimes a skin-walker will be tracked down, only to lead to the house of the tracker, or someone known by him. As in European werewolf lore, a human form will keep any injuries sustained during animal form, which is sometimes a good way to find a skin-walker hiding in your village. It is said that if a Navajo was to know the person behind the skin-walker they had to pronounce the full name, and about three days later that person would either get sick or die for the wrong that they have committed. It was also believed to kill a skin walker in animal form, was to shot it in the neck with bullets dipped in white ash.

Some say skin-walkers can have the power to read human's thoughts. They also possess the ability to make any human or animal noise they choose, regardless of their current form. A skin-walker may use the voice of a relative or the cry of an infant to lure victims out of the safety of their homes, since a skin-walker cannot enter an inhabited home without invitation, similar to vampires.

The yee naaldlooshi can be spotted and singled out from other people, because their eyes glow like an animal's, sometimes even more so, even in human form. In animal form they can be spotted by moving stiffly and unnaturally, or acting strangely.

Skin-walkers use spells and charms to instill fear and control in their victims. Some of the tools at their disposal include fragments of human bone launched by blowguns, which can poison and kill the unfortunate victim, and human bone dust which can cause paralysis and heart failure. Skin-walkers have been known to find traces of their victim's hair, wrap it around a pot shard, and place it into a tarantula hole. Even live rattlesnakes are known to be used as charms by the skin-walker. A skin-walker can use anything of personal belongs and use in ceremonial rituals against the person they are doing evil against.

Skin-walkers use a powder called corpse dust, also known as corpse poison, corpse powder, and án't'i, to poison victims. Corpse dust is composed of ground infant bones, often twin infants, specifically bones from the fingertips and back of the skull. The yee naaldlooshi blow it into the faces of their victims, or down the chimney of the victims' home. Soon after the victim breathes the dust the tongue starts to swell and blacken, they undergo convulsions and die not long after.

Some medicine men were said to be so in tune with the flow of nature that they would often take the form of a sacred 'totem animal'. Totem animals are kind, gentle animals that have grown on humans so much they acquire a sacredness, and are honored with dances, music and artwork. These men are not to be confused with yee naaldlooshi however, medicine men practice healing, blessings, and the removal of curses, whereas a skin-walker seeks to harm humans, lay curses, and practice evil whenever possible.

It’s a Skinwalker or Wendigo? 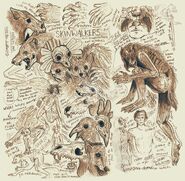 My Drawing of the Skin-Walker, Drawing by Cryptids Boy (Me) 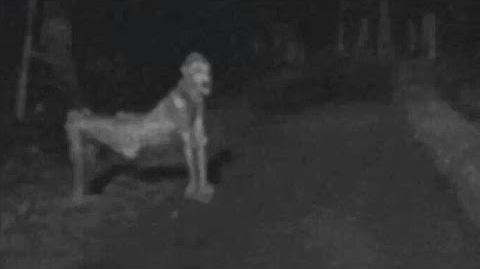