The Siyokoy (Syokoy) are creatures in Philippine Mythology which were members of Bantay Tubig (merfolk). They are usually illustrated as green-skinned humanoids that have scaly body coverings, webbed hands and feet, having fins on several parts of their bodies. 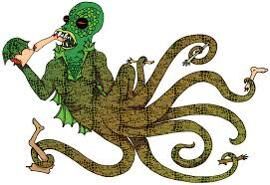 Compared to Sirena, Sireno, and Kataw who have human features, Siyokoys are of animalic in physical form and structure. Some people describe Siyokoy as...

...horrifying sea creatures with fish-like bodies and long green tentacles. They drown mortals and eat them. They have gill slits, are colored brown or green, and have scaly skin, comparable to that of fishes.

Intimidating aquatic animals such as eels, octopus, rays and squids usually swim along with Siyokoy.