Siwil (also known as Owil, Si Wil, or just simply Wil) is said to be a race of wild humanoid living in the jungles of Java. It may be similar to other small humanoids living in Indonesia like Orang Pendek, Orang Mawas, Tirau, Ebu Gogo, Ine Weu, and Poti Wolo. The name itself comes from Javanese word “sak cuil” or “secuil” which means “little”. These little men usually reported from Meru Betiri national park in East Java and the neighboring locations. 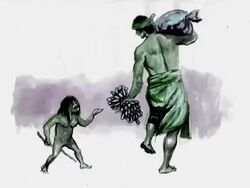 Siwil’s height is reported to be below 1 meter. Naked in appearance, the Siwil is reported to travel in groups. They also has a bit hairy body, with long hair often reaching the shoulder. Siwils often reported near water source, looking for fishes, shrimps, and crabs which is their favorite meal. They also reported to possess some ability to craft simple tools, such as spear and small carrying bag for their food. When encountering human,  they will run away to the forest with great speed. Also they had the ability to jump in great height and length (compared to their body) for escaping from human’s sight.

Friar Jordanus in his book, Mirabilia Descripta (ca. 1330 AD), mentioned that pygmy men is found in Java, with the size of 3 or 4 years old boy, with the body described as all shaggy like a male goat. They dwell in the woods, but only few are found.[1]

John of Marignolli (1338–53) recorded that when he visited the Kingdom of Saba (Java), he seldom caught sight of hairy men, who would flee into the forest when they perceive anyone coming. They did a great deal of work, sowing and reaping corn and other things, and people may trade with them by putting items in the middle of a path. Then the purchasers go forward and deposit the price, and take what has been set down. John concludes that:

...these monsters are not men, although they may seem to have some of the properties of men, but are merely of the character of apes; (indeed if we had never seen apes before we should be apt to look upon them as men!); unless forsooth they be monsters such as I have been speaking of before, which come of Adam's race indeed, but are exceptional and unusual births.[2]

Herry Budi Ermawan, a DPRD (municipal council) member, said that he had seen the tracks twice. He also encountered these little men when he is about to go fishing. He saw 5 of them fishing in the river with small tools, like spears. The dwarves run away when noticed Herry’s presence. A week later, he returned to the site with camera. From a distance about 10 meters, he snapped 5 photographs of them. Strangely, when the photos is processed, only the background is visible, with no trace of the dwarves.

Jejak-Jejak Misterius (Mysterious Tracks) team made expedition to find them in 2011. Anang Ritarno (a nature lover) said that he has seen some tracks that only as big as a lighter. When measured, the length (toe to ankle) is 9,2 cm whereas the width is 2 cm. The toe itself is 1 cm in length. The tracks found near estuary of Nanggelan river, Wonoasri village, Jember. Anang himself said he had seen the creatures twice, in 1984 and 1999.

One of it occurred between Nanggelan beach and Sukamade beach. He saw 8 dwarf men enjoying shrimps from 15 m distance. The men had shoulder-length hair, 60-70 cm in height, naked, but walked upright like normal humans. When they noticed Anang’s presence, they bolted off to the jungle.

Miskarim (Meru Betiri forest ranger) said that they are human-like in appearance, can jump in great height and length when traversing rocky terrain of Indonesian rivers. onomatopoeically he said the sound as “au-au-au” (likened the sound to monkey or primitive humans seen on TV).

When investigating the beach near Bande Alim, Mysterious Tracks team succeeded in recording a video of the creatures. When facing the southern side of the jungle, where the edge meets the shore, 3 little humanlike creature recorded running away to the jungle. One of them seems to be carrying net-like bag or a spear.

The description of Siwil is more humanlike than other short humanoid from Indonesia. For comparison, Orang Pendek’s appearance is similar to bipedal short gorilla meanwhile Ebu Gogo, Ine Weu and Poti Wolo appearance is similar to orang utan. Siwil can make simple tools and live in community, indicating higher intelligence than the other humanoids. They might be similar to Mante tribe from Aceh. It can be concluded that Siwil is closer to modern humans than animals.

Footprint found near a stream

Footprint in a Japanese WW2 bunker