In 1911, miners began excavating the rich guano deposits in Lovelock Cave, just twenty-two miles southwest of Lovelock, Nevada. After removing several carloads of bat dung, they had come upon some supposed Native American relics, and soon after, a six-and-a-half foot tall mummy with red hair.

John T. Reid of the Lovelock area thought the mummy was authentic, so he spent his life trying to prove it. In his files of the giants were descriptions of long hair robes worn by a few Pauites; the hair was human, and it was reddish-brown. Even though years had passed and no evidence had been found, the legend still persisted on. Then, people found several legbones. By judging the size of them people deduced that they were six to ten feet tall. However, scientists thought that they could only be 5' 11". Today, you can still see some bones, a skull, and artifacts at the Humboldt Museum in Winnemucca, Nevada. Unlike many cryptids today, these were about as close as you could get to Sasquatch, but also humans. Unfortunately, it seems that nobody will be able to see a Si-Teh-Ca because it seems they are extinct. 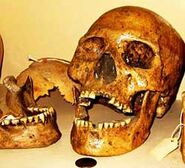