During the mid-1960s a boy and his family were repeatedly harassed by a pair of colossal, albino creatures that can only be described as giant, prehistoric monsters. Admittedly, the evidence surrounding this case is scant. In fact, the only known report of these creatures comes to us from a letter printed by noted “Mothman Prophecies” author and paranormal investigator John Keel in his tome on unknown creatures entitled: “The Complete Guide to Mysterious Beings.” The letter was written in 1970 by an unidentified 15 year-old resident of Sherman, New York, who either withheld his name or requested anonymity in order to avoid the social scandal it would no doubt cause a young high school student.

In his letter he describes a pair of gargantuan, white, sloth-like beasts that would habitually invade his parents’ swamp side property between 1965 and at least the early 1970s. The excerpt of the letter printed by Keel is brief, yet — in choosing to select it from the scores of other accounts he had available to him — one must assume that he felt that it had merit as a case worthy of consideration. Whatever Keel’s motivations were in including it in his book, there are few who would argue that this report contained one of the most intriguing and bizarre cryptids ever chronicled, especially when one considers that this report does not hail from some dense jungle or remote tundra, but the westernmost portion of the state of New York. The passage is reprinted in its entirety:

“Letter from a young man in Sherman, New York: I am writing because about three or four years ago, [circa. 1965-66] I saw a white monster in a swamp beside our house. I have been seeing these things ever since then and close to our house. One night it came down in our yard.” The letter continued with a description of the colossal beast: “It stands between twelve and eighteen feet high, it has a long tail between six and eight feet long. It is all covered with hair. They are always white. I have seen them alone or two at a time. It can walk on two feet or four feet. It is almost a double for a Prehistoric Sloth. My whole family has seen this thing and I know of two more men who have seen them… I am fifteen years old and I am not kidding. I have seen these things and they are real.”

The creatures described above are very similar to the notorious South American cryptid know as the Mapinguari. Brazilian legend states that these hairy man-eaters have backwards feet, one eye and an exposed heart in their chest, but most modern investigators feel that — its more bizarre attributes notwithstanding — this is actually a formerly-classified extinct animal from the Miocene epoch (which lasted until about 10,000 years ago) known as the Megatherium or the Giant Ground Sloth. Though the Megatherium ruled South America, to the north another species of giant sloth, Megalonyx, dwelled in a habitat extended across the vast woodland areas of North America. It is worth considering perhaps that these mystery animals might represent a relict species of giant sloth, wherein they have lost their pigmentation due to the inevitable inbreeding that would occur in such an isolated — and ostensibly small — breeding population. It has also been suggested that these presumably ancient creatures are not some evolutionary offshoot, but the spectral echo of the megafauna that once dominated the landscape of the United States. This theory does not seem to be supported by the initial report, as the young man in question seemed to talk about genuine creatures and gave no indication that he believed that these animals were phantasmagoric entities.

Sadly this is the only known report of these creatures that we've found on record. This seems strange considering the fact that at least a pair of 18-foot tall, albino, allegedly prehistoric monsters would have a difficult time remaining concealed, even in the most rural regions of New York. The fact that no one else in the teen’s family — nor the two unidentified additional eyewitnesses — ever came forward to substantiate this story, combined with the difficulty of hiding these mammoth monstrosities, have led many to dismiss this account as a hoax… But there is a minute possibility that at least a handful of Megalonyx’s descendants might still be lurking in a remote swamp on the western edge of New York State just waiting to be discovered. 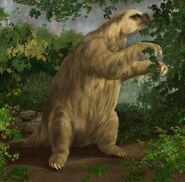 A Megatherium, a species of ground sloth.
Add a photo to this gallery

Retrieved from "https://cryptidz.fandom.com/wiki/Sherman_Beasts?oldid=103321"
Community content is available under CC-BY-SA unless otherwise noted.