Cryptid Wiki
Register
Don't have an account?
Sign In
Advertisement
in: Cryptids, Carnivore, North America (Minus Mexico and Caribbean),
and 7 more 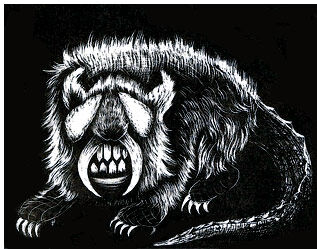 Sheepsquatch, also known as the "White Thing", is a woolly-haired cryptid reported across numerous counties in West Virginia, predominantly within the southwestern region of the state. The counties with the most sightings are Boone, Kanawha, Putnam and Mason, with a surge in sightings taking place in Boone County during the mid-1990s.

It is described as being a quadruped about the size of a bear, with entirely white wool-like fur. It has a long and pointed head, similar to a dog but with long, saber-like teeth and a single-pint set of horns not dissimilar from those found on a young goat. Its forelimbs end in paw-like hands, similar to those of a raccoon but larger, while its tail is long and hairless like that of an opossum. It is reputed to smell like sulfur, which has been attributed through folklore to the beast being born within the TNT Area in Mason County like one of the Mothman theories, though this is not likely and instead may be a musk scent gland similar to those found in many species in the order Carnivora such as weasels and skunks.

In 1994, a former Navy seaman stated having witnessed the beast breaking through the forest. The white thing breached the brush line and knelt to drink from the creek. Here it drank for a few minutes before crossing the creek and continuing on toward the nearby road. The witness stated that they observed the animal for a while before it moved on into the surrounding brush.

Within the same year, two children observed the creature while playing in their yard within Boone County. What they reported having observed looked like a large white bear yet in this case stood up on its hind legs, making it over six feet tall (presumably it did so in a manner similar to bears trying to observe as opposed to walking bipedally). Startled by the children, the beast ran off through the forest, breaking medium-sized limbs off of trees in its path.

The creature was next spotted a year later, this time involving a car. A couple driving through Boone County observed a large white beast sitting in the ditch alongside the roadway. As many curious passersby might do in such a situation, they stopped their car to get a better look at it. They came to describe the creature again as mostly similar to earlier descriptions, yet they added that the creature had "four eyes". In stark contrast to the last sighting where the Sheepsquatch fled the scene, the creature leaped out of the ditch and started to attack the car. Frightened by the attack, the couple drove off quickly, and once they arrived back at home noticed large scratches on the side where the beast had attacked.

Another incident in 1999 involved a couple of campers who were in the forest at night, again in Boone County, around a bonfire. They eventually heard an animal snorting and scuffling around the camp in a manner similar to an aggravated bear, though it did not come into the light of the campfire immediately. All of a sudden the Sheepsquatch suddenly charged out of the darkness at the campers. Reacting quickly, they jumped up and ran back into their house, all the while being pursued by the Sheepsquatch (giving chase is a natural reaction of a predator when a creature flees; its initial "attack" could have simply been a mock charge). The white thing stopped at the edge of the forest when they crossed it and let out a "terrible scream". It then turned around and headed back into the woods. The next morning, the campers returned to their campsite and the trail home, finding it to be torn up; they referred to it as "like someone had tilled it up for gardening".

In Fulks Run, Virginia, the beast was spotted once again in the forests of Appalachia. The creature was spotted close to midnight by six campers, spending the night in the dense woods. The beast was reportedly 8-9 feet tall with a shoulder length of 4-5 feet. One of the campers first saw the beast at the top of the near by hill, in a crouching position. Then it stood up, and he alerted the other campers. Then it started running down the steep hill toward the campers, but they were separated by the river that was flowing through. They look in horror as it searched for a way to cross, and with no other option, began to wade through the river. It finally came out of the water, and the campers reported that it appeared like a bipedal dog in the chest, with its fur wet from the river crossing. Then a loud gut-based screech was heard about two miles off from where they were. Then the Sheepsquatch looked up in shock, just high enough so the moonlight was in its face, and the campers looked on in fear as it let out a pathetic whimper, then in a sprint, ran in the opposite direction of the noise. The campers quickly packed and left, then reported it to the locals, fearing that if the authorities were informed, they would be ridiculed. The identity of the campers is unknown as of March 2016.

-The Sheepsquatch was featured in the Destination America series Monsters and Mysteries in America, where it was encountered by a couple of hunters after it had killed their dogs the time prior.

-The newest update to Bethesda's Fallout 76, added Sheepsquatch as a new cryptid to encounter during a new side quest.