The Shagamaw is a creature from American lumberjack tales, known as a Fearsome Critter. It was the size of a horse with the front paws of a bear and the hind parts of a moose, like some mix of a satyr. It would walk on its hind legs and sometimes walk on its two front paws to leave different tracks in the ground.

It is said that it would walk 440 steps on its front legs and then walk on its back legs for another 440 steps, or around half a mile both ways. This made it very difficult to hunt down and it became a creature of great stealth. It had a hunger for cloth, especially cotton, and would eat the washing left out by local people.

The Shagamaw likely alternated between legs to confuse lumberjacks on the hunt. It was considered an insult for a woodsman to be told he incorrectly identified animal tracks such as moose or bear, so brawls were bound to insue over the cunning, sneaky critter. The rascall always followed tote roads. Some believe this is the effect of the varmint's significant observation of the woodsmen who trodded the same paths. It is also believed that the critter took 440 steps with each set of legs due to the fact that it was unable to count any higher.

The Shagmaw was not a creature of direct aggression, but more so of irritating and mysterious antics, such as many Fearsome Critters.

"The Toteroad Shagamaw" from Fearsome Critters (1939) by Henry H. Tryon 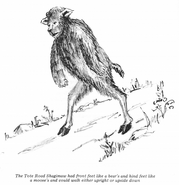 Add a photo to this gallery
Retrieved from "https://cryptidz.fandom.com/wiki/Shagamaw?oldid=105912"
Community content is available under CC-BY-SA unless otherwise noted.