Start a Wiki
Shadow People are reported worldwide and since the beginning of recorded history. Shadow people seem to be living shadows.But could possibly be paranormal. They are usually seen out of the corner of peoples eyes. Some people see semi-transparent dark splotches.

They vanish as soon as a person realizes what they saw. When people see shadow people a feeling of despair and fear overcome them. There have been some reports of being attacked or chased by these shadows.

The shadows are usually larger than a normal shadow and notable don't resemble the shadow of the person sighting it. They are often reported moving with quick, jerky movements, and quickly disintegrate into walls or mirrors.

They range from being mist-like to being completely solid like a regular human.

Though this is not true to all shadow figures. Some of them may possess eyes, the eyes vary in color and are classed as having certin traits of behavior based the color of their eyes. Although this list is still being documented it is known that the white-eyed shadows are typically faster, more logical, and much more still.

They are believed to be evil and aggressive in nature, although a few people consider them to be a form of guardian angel. A Shadow Person's behavior tend to vary, suggesting they may be as varied as regular people. Some report that when looked at in the chest or eyes, they emit a loud scream that sounds like screechy static, loud winds, and/or creaking wood.

They often cause their victims to feel unable to move, and stare at them in silence, rarely ever speaking. Sometimes they will even sit on their chests. Many are spotted within hospitals, or otherwise near those who are dying.

One commonly seen Shadow Person is known as The Hat Man, who has been reported worldwide with very few variations in overall appearance and behavior.

The Hat Man is a solid black man (sometimes with red or black eyes) with a wide rimmed hat (usually reported to either be a Zorro hat or a Fedora) and a long trench coat (sometimes cape). Unlike other Shadow people, he is generally seen as much more physically solid. He is sometimes reported to have a goatee, or be clean shaven. Some reports claim he has no face at all.

Those who see The Hat Man report feeling a sense of malevolence coming from him, and he seems to show curiosity towards witnesses. He seems to take great pleasure from the fear of witnesses. Some witnesses have gone as far as to claim him to be the devil.

Other types of Shadow People spotted include:

Another theory suggests that they could be time travelers. This suggests that Time Travelers are not perceivable for human beings, but now we're beginning to become more aware of time travel, resulting in the visibility of the Shadow People. This theory is quite possible, as Shadow People sightings have been going on for many, many years.

However, the most likely explanation is that they are another case of Pareidolia 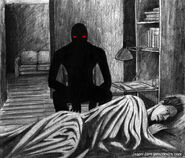 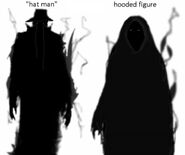 Two version of the shadow people 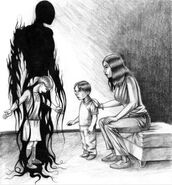 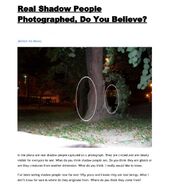 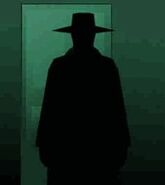 Retrieved from "https://cryptidz.fandom.com/wiki/Shadow_People?oldid=106642"
Community content is available under CC-BY-SA unless otherwise noted.