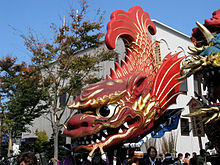 The Shachihoko, also known as the shachi (which means orca in Japanese), is a fearsome, legendary sea creature from Japan. This alleged creature has the head of a tiger and the body of a carp, with its tail always pointing upwards into the sky. It was believed that this creature could create rain. As such, temples, castles, and other holy structures' roofs were often adorned with ornaments, or shibi of this animal to deter fires. Legend has it that Shachihoko live in colder, northern oceans along with a carnivorous diet. They are able to swallow large amounts of water and hold it in their bellies. They are still a common sight in Japanese culture to this day. 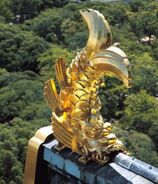 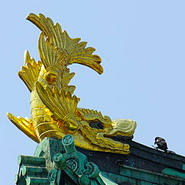