The Sea Monk, or sometimes Sea Bishop, was the name given to a sea animal found off the eastern coast of the Danish island of Zealand in 1546. It has also been sighted by two fishermen and some nearby swimmers in Pula, Croatia in the year 2011 and is one of the more popular sightings of the cryptid in the Adriatic sea. It was described as a "fish" that looked superficially like a monk. It was mentioned and pictured in the fourth volume of Conrad Gesner's famous Historia Animalium. Gesner also referenced a similar monster found in the Firth of Forth, according to Boethius, and a sighting off the coast of Poland in 1531. The sea monk was subsequently popularized in Guillaume du Bartas's epic poem La Sepmaine; ou, Creation du monde, where the poet speaks of correspondences between land and sea (emphasis added):

"Seas have (as well as skies) Sun, Moon, and Stars; (As well as ayre) Swallows, and Rooks, and Stares; (As well as earth) Vines, Roses, Nettles, Millions, Pinks, Gilliflowers, Mushrooms, and many millions of other Plants lants (more rare and strange than these) As very fishes living in the Seas. And also Rams, Calfs, Horses, Hares, and Hogs, Wolves, Lions, Urchins, Elephants and Dogs, Yea, Men and Mayds; and (which I more admire) The mytred Bishopand the cowled Fryer; Whereof, examples, (but a few years since) Were shew'n the Norways, and Polonian Prince."

Steenstrup's comparison of a squid too two drawings of the sea monk from the sixteenth century In the early 1850s, Danish zoologist Japetus Steenstrup suggested that the sea-monk was a giant squid, a theory more recently popularised by writer Richard Ellis. Cryptozoologist Bernard Heuvelmans believed the report was based on the discovery of an errant walrus. More recently, it has been suggested that it was an angel shark Squatina squatina, which is commonly called monkfish in English or munk in Norwegian. Others suggested suspects for the sea monk include a grey seal, a hooded seal, a monk seal, or a hoax such as a Jenny Haniver.

The sea bishop or bishop-fish was a type of sea monster reported in the 16th century. According to legend, it was taken to the King of Poland, who wished to keep it. It was also shown to a group of Catholic bishops, to whom the bishop-fish gestured, appealing to be released. They granted its wish, at which point it made the sign of the cross and disappeared into the sea.

Another was supposedly captured in the ocean near Germany in 1531. It refused to eat and died after three days. It was described and pictured in the fourth volume of Conrad Gesner's famous Historiae animalium. 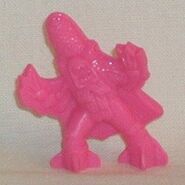 Bishop Fish from Monster in My Pocket

Green Bishop Fish from Monster In My Pocket 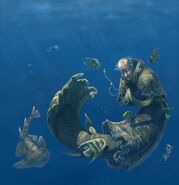