In 2014, a photo of a giant squid of giant proportions in Santa Monica appeared in The Lightly Braised Turnip, supposedly bigger due to the Fukushima Radiation.

The squid appeared on Twitter all days, with hashtags such as #RadioactiveGigantism or #GiantSeaCreature.

The squid is real but not the photo. The squid is from a photo of a Giant Squid that washed up in Cantabria, Spain. The squid was made bigger and put in a photo of a beached whale in Chile. This just shows that hoaxers are getting worse as the years go past. 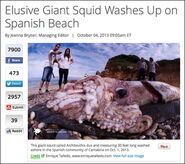