Cryptid Wiki
Register
Don't have an account?
Sign In
Advertisement
in: No Modern Sightings, Cryptids, Cryptid Wiki,
and 5 more

Sandwalker is a legendary beast from Arab mythology. It's a gargantuan, nocturnal crab about the size of a horse, with a bird-like beak, and a scorpion's tail.

It is known to bury itself in the sand during day to avoid detection, and only come out at night. It rarely eats humans, but it is said to steal camels and horses from caravans and eat them. If the creature walks, it leaves giant crab-like tracks behind.

It is theorized that this cryptid could be related to the Wallowa Lake Freshwater Crustaceans, or the recent Giant Crab sighting dubbed 'Crabzilla'. 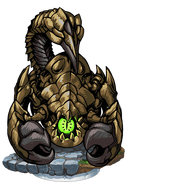 A sandwalker in popular media, or as it appears in the Blood Brothers video game