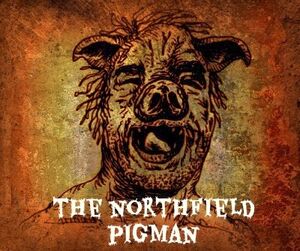 Sam Harris, also known as The Pig Man of Northfield, is the legend of a boy at age 17 that went missing in the hills Of Northfield, Vermont in 1951.

Sam Harris is often described as being covered in white hair, and wears the face of a Pig. It's unknown if the Pigman is Sam Harris, or the beast that ate Sam Harris, so the monster could actually be some sort of canniballistic Bigfoot.

The night before Halloween, October 30, 1951 Sam set out with eggs in hand for what he called Picket Night, a night of mischief. The next morning when his parents awoke and found him missing, this set off a huge search party that lasted weeks and involved hundreds of locals over hundreds of square miles. Although never found, it is said there has been sighting of Sam who some say became possessed by the Devil himself that fateful night. Sam Harris is known to slaughter pigs, eat their entrails, hollow out the pig’s head, and wear it over himself all while terrorizing the New England town locals. Sam supposedly still haunts the hills surrounding Devil’s Washbowl. Rumour has it he lies with the pigs and is also known for bestiality spawning half man half pig offspring.

Years later, some high school kids were out drinking behind the school one night during a dance when this... thing... came walking out of the woods on two human legs. It was naked, covered in white hair, and was wearing a hollowed-out pig's head like some grotesque mask.

Naturally, the kids tore out of there and went and told people. Word spread, and some farmer admitted he'd seen a figure matching that description digging through his garbage one night. Some pigs had also gone missing recently. More sightings were made of the Pigman, but many times the claims were just kids wanting to get attention.

Sam Harris is most likely just a halloween story, but some believe it could be a Woodwose or Bigfoot. If it is real, it could be potentially be the same species as The Pig-Man of Cannock Chase.