Salawa is a cryptid that has some relation with chimerical beast of the god Seth in Egyptian mythology called Sha.

The sha is usually depicted as a slender dog, resembling a greyhound or a jackal, with three distinguishing features: a stiff tail, often forked at the end, which stands straight up or at an angle, whether the animal is sitting, standing, or walking; its ears, also held erect, are usually depicted as squarish or triangular, narrowest at the base and widest at the squarish tops; and a long nose, often with a slight downward curve. It is normally depicted as black, but may also have been reddish.

In the 1960s, and again in April 1997, stories circulated in Egypt about a mysterious canid, dubbed the salawa or sal'awa (scary wolf). The creature allegedly attacked several small villages in remote parts of southern Egypt, resulting in several injuries and even deaths.

A contemporary report indicates that one of the animals was killed by residents of the Qattamiya suburb and tentatively identified by local police as a hyena. During filming of a 2009 episode of the SyFy channel program, Destination Truth, an animal suspected by the film crew of being the salawa was determined to be a Fennec fox.

This variety of fox is another possible identification for the sha. Its large, squarish ears and slender legs, its solitary habits, and its reddish fur are all consistent with representations of the sha, although the animal's other features must have become highly stylized. 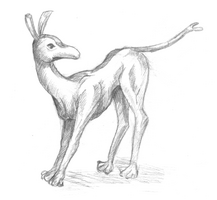 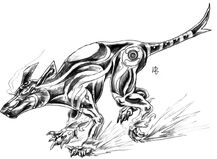 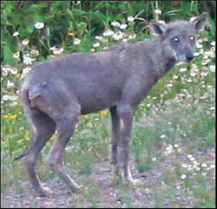 Picture of salawa in madinaty (a city in Cairo)

Depiction of Sha in Hieroglyph