Sakhalin Island Sea Wolf was a mutilated cetacean corpse that was found by Russian soldiers on the Sakhalin shoreline. Sakhalin area is situated near to Japan, it's the most eastern part of Russia, almost 5000 miles to East from Moscow. The Creature Has been indentified as a beluga carcass

According to a scientific survey, the bones and teeth are not of a fish. According to its skeletal remains, it was not a crocodile or alligator; its skull resembled that of a canine, while the creatures rear coincides with that of a fish. However the real identity can be concluded by looking at the skull, it's most likely some type of whale; particularly a beluga or an orca, with the skull matching that of such creatures (the little notch in the skull being seen in one of the photos).

The image of the cryptid that was used for SCP-682 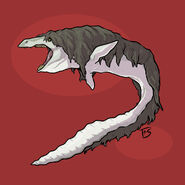 Illustration from The Critter Compendium, of how it may have looked when it was alive

The Creature's skull greatly resembles that of a Beluga Whale.