Cryptid Wiki
Register
Don't have an account?
Sign In
Advertisement
in: Cryptids, Dinosaurs and Pterosaurs, Indonesia,
and 19 more

The Row of Western New Guinea is strange looking dinosaur. Even Bernard Heuvelmans could not accept this particular testimony.

Row is a hump-backed, massive dinosaur creature around forty feet long, with a long and slim neck and tail. The small, beaked, turtle-like head is adorned with a bony frill and armed with a sharp beak. The front legs are shorter than the hind legs, allowing the row to rear up. The bulky body is a light brown-yellow, blending in with the reedy swamps it lives in, and is covered with uneven scales like armor plate. Along the back is a line of triangular plates. The long tail is tipped with a single twenty-pound keratinous spike. In cross-section the spike resembles a series of stacked cones. One side of the spike is worn down as it drags along the ground.

The row was encountered by Charles “Cannibal” Miller and his wife Leona during a honeymoon in the West New Guinean jungle. Considering that they lived with the Kirrirri, an undiscovered tribe of cannibals, and were served cooked babies. 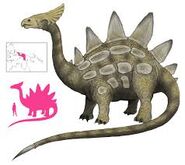 Rendering of Row, created by abookofcreatures.com

It started when Leona noticed the Kirrirri using implements that resembled elephants’ tusks (there are no elephants or rhinos in region). These proved to be row horns, and Charles managed to make it understood that he wanted to see the creature it came from. The Kirrirri obliged, and the journey took a few days to get to the row’s habitat.

They found a row in a swampy river delta between two arid plateaus. The sight of it was enough to paralyze Miller with fear, but not long enough to prevent him from filming. The row’s head rose from the reeds on the end of a long neck, and its tail lashed as it called out. It reared several times, glancing in the direction of the whirring camera, before slithering away and disappearing behind a stand of dwarf eucalyptus.

That was the first and last written account of the fabled Row, altough there are few sightings of Dutch East Indies explorers and colonizers seeing a giant reptile with long neck, humps on back and also having turtle's head. Intriguingly, however, as documented in Rex and Heather Gilroy’s fascinating Australian cryptozoology tome Out of the Dreamtime (2006), reports of a neodinosaurian cryptid with the similar-sounding local name and of Rahruh have apparently been emerging elsewhere in New Guinea, but especially Papua New Guinea, for at least a century. Exploers Miller did not bring back or photograph any of the row’s tail-spikes. The film he took of the row was allegedly shown to select individuals, but there was no word of any saurian creature in it. Even the Kirrirri, to the best of anyone’s knowledge, do not exist. And, taken at face value, the Row appears to combine features from sauropods, ceratopsians, and stegosaurs – all unrelated dinosaur lineages.

The story of this beast is "fishy" and likely a hoax to get attention and fame for the couple, but there is a extremley little chance that the Row creature is living dinosaur who roams the unexploerd plateaus of western New Guinea. There are many new dinosaur fossils found around the Asia, who fits little to description of Row. It can also be a rare unfound reptile species.

Dinosaurs who are slightly simmilar to Row.