The rompo is a mythological beast originating from the legends of India and Africa. It has a long and thin body (approx. 2-3 feet), and is said to have the head of a hare, human ears, a horse's mane, the front arms of a badger and rear legs of a bear.

The creature is believed to be nocturnal, secretive, and feeds on human corpses. It is also said to croon softly as it eats. Reports from African locals state that when the Rompo finds a dead body, it will not feast on it immediately, but circulate it many times to make sure it is safe to approach. When the Rompo is cornered or put into a state of fright its skin will change to the colour of what it sees. Among trees and shrubs, the Rompo’s skin becomes green.

The legend of the Rompo may have been inspired from sightings of Old World porcupines.

An image of a Rompo. Its features make it similar to a weasel. 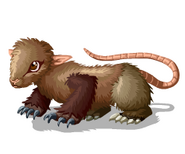 A rather cute rendition of a Rompo.

Painting of a Rompo. 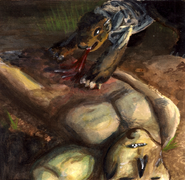 A Rompo feasting on a corpse.