Cryptid Wiki
Register
Don't have an account?
Sign In
Advertisement
in: No Modern Sightings, Cryptids, Cryptid Wiki,
and 4 more

A Red Cap or Redcap, also known as a powrie or dunter, is a type of malevolent murderous dwarf, goblin, elf or fairy found in Border Folklore. They are said to inhabit ruined castles found along the border between England and Scotland. Redcaps are said to murder travellers who stray into their homes and dye their hats with their victims' blood (from which they get their name).

Redcaps must kill regularly, for if the blood staining their hats dries out, they die. Redcaps are very fast in spite of the heavy iron pikes they wield and the iron-shod boots they wear. Outrunning a redcap is supposedly impossible.

They are depicted as sturdy old men with red eyes, taloned hands, and large teeth, wearing a red cap and bearing a pikestaff in the left hand. The tale of one in Perthshire has him as more benign; living in a room in Grantully Castle, he bestows good fortune on those who see or hear him. The Kabouter, or redcaps of Dutch folklore, are very different, and more akin to brownies.

According to the local legends, Robin Redcap, along with his master, were responsible for all manner of depravity and devil-worshiping in the past and became so dangerous that the locals had to stage a rebellion of sorts against William de Soulis and boil the madman alive to stop his reign of terror.

As for Robin Redcap himself, the demon was said to have vanished shortly after the death of his master though its never truly known if such a being could ever truly be considered dead - perhaps he is simply waiting for a chance to return. (in some versions Robin can be seen infrequently, guarding a hidden treasure buried deep under the castle - which he amassed during his reign of terror) Robin Redcap is likely related to other roaming spirits in English mythology and may well be an alter-ego of said beings, indeed when his master died it is possible Robin Redcap simply took on another form and name, as was common for malicious "fairy folk".

Robin Redcap's infamy is sufficient that in same versions of the legend he is not just a goblin but an alter ego of the Devil himself. 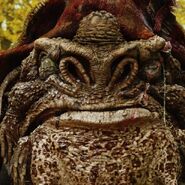 Redcap from the Spiderwick Chronicles 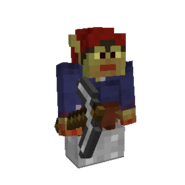