The Queensland tiger is a cryptid reported to live in the Queensland area in eastern Australia that is similar the thylacine.

Also known by its native name, the yarri, it is described as being a dog-sized feline with stripes and a long tail, prominent front teeth and a savage temperament. It has been hypothesized to be a survivor or descendant of the large predatory marsupial Thylacoleo, officially considered to be extinct, or possibly a large feral cat variant (given possible discrepancies with thylacoleo dentition). In 1926 A. S. le Souef described it as being a ‘Striped marsupial cat’ in The Wild Animals of Australasia, this information later also included in Furred Mammals of Australia, by Ellis Troughton, longtime curator of mammals in the Australian Museum. Among cryptids it has arguably come closest to official recognition.

The earliest documented witness reports of the Queensland marsupial tiger date from 1871, with indigenous traditions of the yarri preceding these. Reports indicate that it is fast and agile (Welfare & Fairley, 1981). Reports have come consistently from the Northeast of Queensland. Though these have diminished in number since the 1950s, they continue to occur (the Beast of Buderim being one recent example of the phenomenon).

Thylacoleo carnifex or the Marsupial Lion, is an animal of similar size and predatory habits, did live in Australia as recently as the late Pleistocene period, perhaps coexisting with the very first humans that arrived at Australia who were the ancestors of modern Australian Aborigines. However, scientists estimate that Thylacoleo went extinct 30,000 years ago. Modern sightings of an animal described as remarkably like Thylacoleo have led some researchers to speculate that a small relict population has somehow survived in remote areas.

Cryptozoologists who promote the theory of survival of the Tasmanian Tiger or Thylacine Thylacinus cynocephalus, a Thylacinid, and also currently accepted as extinct, favour proposed survival of The Queensland Tiger. The fundamental difference between the two cases, however, is that the last Tasmanian Tiger in captivity died in 1936, and the species was not officially declared as extinct until 1986. This makes the prospect of species survival of the Thylacine more likely than that of Thylacoleo. However, most cryptozoologists regard a thylacine identity for the Queensland tiger as very unlikely, as the Queensland tiger and the thylacine do not resemble one another in appearance or behaviour. 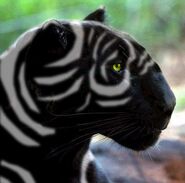 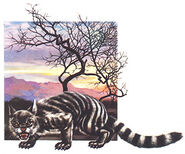 The Queensland Tiger based on eyewitness accounts 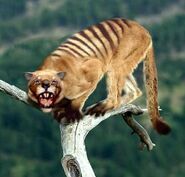 Could it have been a thylacoleo carnifex?