A mysterious carcass, named the Pukehina Predator, was washed ashore in New Zealand in June 2014, fueling speculation about sea monsters and dinosaurs. The rotting animal was discovered by a group of people on four-wheel vehicles speeding along the beach in Bay of Plenty.

According to a story in New Zealand’s Sun Live newspaper, “beachgoers were stumped when they came across what they thought was a prehistoric creature on the shore … stretching about 9 meters (30 feet) in length with large teeth and rudimentary flippers.”

According to New Zealand's Sun Live, the mysterious remains were found by a group of beach-goers near Pukehina on New Zealand's Bay of Plenty. One of the group posted a video of the so-called "monster" to YouTube on April 28, along with this simple query: "Can anyone identify what it is?" The video captured the imagination of viewers, who suggested in the comments section that the creature could be anything from a saltwater crocodile to a giant moray eel. But according to marine mammal expert Anton van Helden, the carcass is more likely to be the remains of a killer whale. 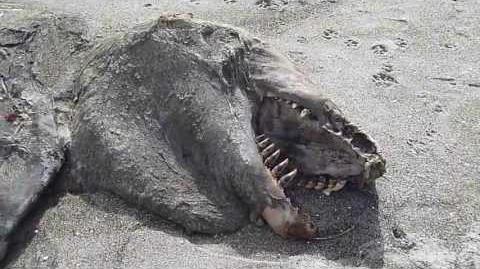 It could be a surviving Zeuglodon
Community content is available under CC-BY-SA unless otherwise noted.
Advertisement